One of my favorite shows, in the worst way possible, was that Ancient Aliens show on the History Channel. Not because it’s a good show, but because it’s so laughably bad that it makes for some of the best mindless entertainment on TV.

(To be clear: TV is all mindless entertainment. So if you’re going to veg out, you might as well go big.)

For those more sophisticated readers who may have never been exposed to such trash TV, the show features conspiracy theory nutjobs who dabble as pseudo-scientists. They deploy all sorts of questionable logic, and the show tends to follow a predictable pattern:

A talking head presents an innocent and thought provoking question about the limitations of a previous civilization, then highlights an impressive accomplishment about said civilization. When an explanation for their accomplishment isn’t immediately available, the presenter’s inevitably conclusions?

The show’s favorite example is the Egyptian pyramids. The construction of the pyramids have perplexed experts for years, so the Ancient Aliens show concludes that the pyramids were obviously built by aliens. 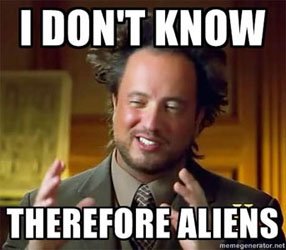 It’s all silly good fun, if we all didn’t do the exact same thing every day.

Now imagine the year is 3500, and the Millennial American is ancient history. In fact, our very own society is featured prominently on the History Channel’s 1,483rd season of Ancient Aliens.

“How did they ever build 1,000 foot tall skyscraper? Their cranes were only 100 feet tall!”

See the issue with this logic?

The big results always come from the baby steps. That “overnight sensation” is the result of years and years of hard work.

The skyscraper isn’t erected overnight, and the pyramids weren’t built by the magic touch of an alien. First you build a foundation, then you slowly add one floor at a time.

After years of hard work, day in and day out, you’re left with an awe-inspiring accomplishment.

So, if pyramids and skyscrapers start with small steps, what’s the foundation to a lifetime of wealth? What’s the “unattainable” goal that we’re incorrectly placing on a pedestal?

Millionaires aren’t made with one lucky investment or lottery winnings. They’re made with a little bit of savings, again and again.

Here’s the truth, and the boring secret nobody wants to talk about:

To become a millionaire, you only have to invest $30 a day for 30 years.

For some reason, nobody wants to hear this. But they should!

Because I don’t know about you, but when success is broken down into such an attainable baby step, I find it pretty freaking inspiring.

I’d be intimidated if the only path to wealth was to trade stocks like a brilliant trader, start a company like a daring entrepenuer, or battle my way through a hard MBA program to an even harder corporate ladder.

That’s cutting back on a few brews, investing a little side hustle money, or even just working a couple of hours at a minimum wage job.

If that’s all it takes to get rich, count me in!

The Shocking Attainability of Becoming Elite

And here lies the secret to becoming elite: a little tiny bit of effort, again and again.

Ramit Sethi calls it the craigslist penis effect. He brilliantly explains that in the early days of online dating, the only thing a guy had to do to rise above the crowd was simply not send a girl a picture of his dick.

Paul from Asset Based Life explains that apparently these days, all you need to do to become an amazing parent is just teach your kids to say please and thank you.

It’s the small actions that separate mediocrity from greatness. And surprisingly, it doesn’t take a ton of effort to be great.

Simply watching what you eat will leapfrog your diet ahead of the millions of Americans sustaining themselves on fast food every day. If you’re really ambitious and make it to the gym three times a week? Congrats! You’re a health one percenter.

And if you save $30 a day again and again? You’re sure to end up one of the wealthiest 1% of Americans in the country.

That’s the best part! It doesn’t have to take you 30 years, because this stuff builds on itself.

I was first introduced to this “baby steps” concepts through David Bach’s Latte Factor. He famously explained how something as simple as cutting back on a $5 daily latte could leave you hundreds of thousands of dollars richer.

So I went for it. I started cutting costs wherever I could, looking to trim fat in my budget wherever it was.

Keep that up for a while? That’s enough to fast track your freedom by decades. And enough to allow you to retire in your 30s.

Before you know it, Ancient Aliens will be wondering how the extraterrestrials gifted you so many millions of dollars.