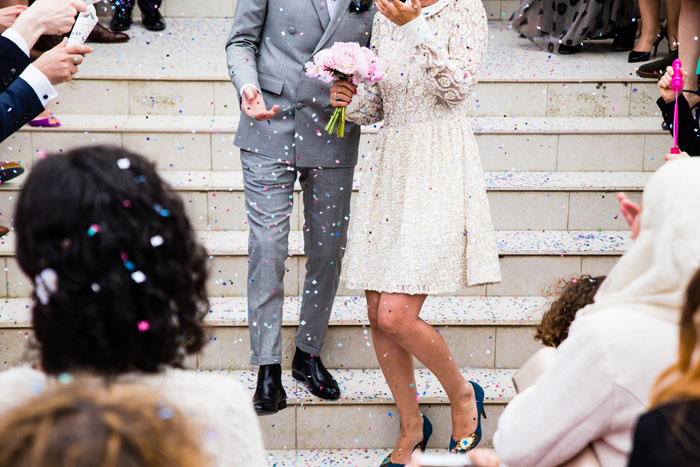 Love is priceless. Or is it?

A new study shows the price of love is actually very specific: $32,641.

That’s the cost of the average wedding last year, a number which has grown larger and larger with each passing wedding season.

Yes, weddings now have seasons. Similar to the National Football League, year after year brides-to-be are engaged in a fierce competition which builds all year towards the prime time show: an insanely expensive June wedding.

Off-season begins with intense scouting of the competition. A few jealous scrolls through another couple’s beautiful wedding photos on Facebook sets the stage. Damn that $3,000 photographer for setting the bar so high for next season…

Training is critical. Wedding planners play the role of head coach, ensuring everyone is prepared to mount a knot-tying offense as efficient as a well oiled machine.

For just a few thousand dollars, the planner coordinates a team of specialist coaches. Tailors ensure the custom made dress (which is actually mass produced in an overseas factory) fits just right. Florists decorate every nook and cranny with material which will be brown and rotten just hours after the show is complete. Even dance lesson instructors ensure none of the couple’s closest friends or family can judge any one misstep too harshly on the big day.

Each season, this intense game of one-upsmanship sets the bar higher and higher. Not to be outdone by the rounds of impressive Facebook updates for the past few seasons, the average wedding cost increased $5,000 since 2010 alone.

And yet here we are. In a time where over half of Americans have less than $1,000 in a savings account and the average household is drowning in over $15,000 of credit card debt, the traditional right of passage into adulthood still involves spending over $32,000 on a lavish ceremony that’s over in a matter of hours.

Why? When did this become normal?

The Cost of Weddings, Then and Now

To be fair, the tradition of lavish weddings in America is a storied one. After all, even ‘ole Grandma and Grandpa have a few photos from their special day ornately framed somewhere in the house. So are we really spending any more on weddings today than any other generation?

The oldest and most reputable look into wedding spending dates back to 1939*, in which B.F. Timmons, a sociology professor at the University of Illinois, released “The Cost of Weddings.” If our wedding spending is at all reasonable and not caught up in a competition of bigger and better, we should expect the inflation adjusted cost of weddings in 1939 to be around $30,000, right?

Wait, we’re not even close!

*By the way, finding the answer to this question of comparison was surprising difficult. Could this challenge be the result of a changing emphasis from a day of love (1939) to a day of ridiculous price tag measuring (2015)?

Comparing the two studies, we get a very different picture of weddings 80 years ago. Here are some of the startling highlights for average wedding spending in 1939:

And those same categories in 2015:

Did I mention these numbers are adjusted for inflation? 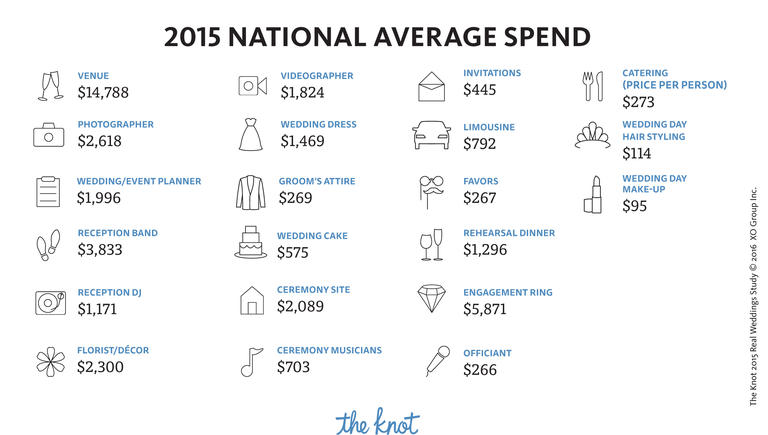 To be fair, humans voluntarily deciding weddings are now five times more expensive could make sense… On an alien planet where it rains $100 bills instead of raindrops. But here on planet earth, where the average newlyweds carry $40,000 in student loan debt and more than half couldn’t come up with $2,000 in the most dire of emergencies, this sort of trend is completely insane.

But Money Wizard, it’s important to start the marriage off on the right foot. A nice wedding sets the stage for a wonderful marriage.”

While that may be true, a “nice wedding” shouldn’t be confused with an expensive one. Spending doesn’t equal love or beauty, and there’s plenty of evidence pointing at an expensive wedding as an early warning sign of a stressed marriage:

And the group with the lowest rates of divorce? Couples who spent less than $1,000 on a wedding.

I Don’t Care, I Want a Once in a Lifetime Wedding.

Maybe even after all of my urging, you’re still set on a $32,000 wedding. That’s fine; we all have priorities. My job here is just to spout off my one sided opinion, not to judge. If you are hell bent on blowing a fortune, can we at least agree not to go into debt for one of these things?

In which case, consider this. If you start saving for your $32,000 wedding the day you graduate college at age 22, and you are statistically average in marrying by age 27, you have 5 years to save.

You need to save about $520 a month for five years to afford your wedding.

That is, of course, assuming you’re actually paying for your own wedding. Statistically, only about 12% of people do this. The rest shackle the bill to their parents, who secretly stress, budget, and work overtime so the big day can be perfect. Tears stream down the parents’ cheeks after the groom kisses the bridge, presumably because of the bright future ahead. Or perhaps the ridiculously large check that’s about to get cashed.

And then there’s the investment potential. $32,000 sounds bad enough when it’s considered a one time fee. It’s downright painful when we evaluate the future returns on that amount of money.

Instead of spending one third of a hundo-grand on a half day blur which whizzes by in the blink of an eye, what if a “boring” couple instead invested $32,000 into a 529 College Savings Plan?

How much could the couple expect 20 years later, right about the age when their future child is college bound? Only somewhere around $124,000 – more than enough for an entire four year college education for at least one kid.

You can have your expensive wedding, but I’m not buying. Personally, the girlfriend and I are planning on hot dogs in a park and few kegs of beer, followed by a a nice honeymoon and a college education for our children.

We all have our priorities, and I know the expectations for an extravagant wedding must be immense. But can we all take a step back to ask ourselves, is this really worth it?

Next week, we will wrap up this two part wedding series with a look into one of the most evil (and successful) marketing campaigns in history.