Note: This article is part 2 of 2 of a series exploring the history of weddings, and just how their prices became so out of control. You can find part 1 here, although it’s by no means required reading. If you’re pressed for time or flat out lazy, you’re in luck – each post functions just fine as a standalone article.

Look at that diamond ring up there, sitting there, tempting us. Taunting us. Pulling us in.

Can you feel it? The Lord of the Rings struggle taking over – the tunnel vision closing our eyesight as the world fades to black, drawing us deeper and deeper into The Ring’s spell.

And cast that piece of evil carbon allotrope back into the fires of Mordor, where it belongs.

Last week, we looked at all sorts of insanely expensive wedding expenses created in the past 80 years. Today we’re looking at the one spending category I find ridiculous enough to devote its own entire blog post.

One Irrational Expense to Rule Them All

Sure, the $19,000 reception seems a little steep for a 3 hour party, a party which pales in comparison to what my college pal Steve could throw together on a moment’s notice. But I still won’t complain too much if someone would rather invite me to a celebration than handle a down payment on a new house.

$2,000 spent on flowers is also crazy insane, but I won’t knock anyone for enjoying a solid collection of hydrangeas.

No, the undisputed champion of crazy spending remains $6,000 on a common rock.

The most startling tidbit from B.F. Timmon’s 1939 study on the Cost of Weddings? Nearly 1/3 of married couples in 1939 didn’t even exchange rings at all. What’s more, 90% of the few rings exchanged had no diamonds.

Today, nearly all couples engage in this mysterious ring trading tradition, and even more mysteriously, they’re all spending a fortune on diamonds too.

So what happened to the world in the past 80 years to cause diamond rings to move from an occasional gift some couples shared, to a universally required sign of love?

The most successful marketing campaign in history.

How Some Rich Guys Convinced the World to Buy Diamonds

At one time in history the diamond was considered rare. Through the 1800s, diamonds had only been found in the riverbeds of India and the jungles of Brazil. Hoping to find more of these rare, valuable stones, British diamond companies began financing the exploration of additional diamond sources in Africa.

The investment worked out too well. The exploration uncovered HUGE diamond mines along the Orange River in South Africa. Diamonds, these discoveries found, were not rare at all. The market was now flooded with these shiny pieces of carbon, and the British financiers were faced with the reality that their diamonds were nearly worthless, overnight.

Numerous sources confirm the resulting conversation went exactly like this:

And that’s exactly what they did. Seeing no way to continue the illusion of the rarity of diamonds, in 1888 the competing British Financiers merged into one united South African cartel which took on the name De Beers Consolidated Mines, Ltd. For the next half decade, the cartel would restrict the world’s diamond supply in an effort to maintain the illusion that diamonds are rare.

Common sense tells us that the only way to increase the value of diamonds is to make them scarce, that is to reduce production.” -Ernest Openheimer, De Beers Chairman, 1910 (actual quote and NOT one of my fictional conversations)

The supply restrictions proved successful for the next 50 years. However, by the 1930s, supply manipulation by the cartel was not proving enough. Faced with the Great Depression and the prospect of a second World War, the demand for diamonds fell.

To combat falling enthusiasm for the diamond, De Beers enlisted a New York marketing agency, N. W. Ayer, to revitalize the public’s demand for diamonds. The advertising agency’s president, Gerold M. Lauck, then conspired both a genius and disgusting advertising campaign which would wreck havoc on the finances of young American couples for the next century.

Edward Jay Epstein, an investigative journalist from The Atlantic, summarizes the advertising campaign in a February 1982 issue:

Since “young men buy over 90% of all engagement rings” it would be crucial to inculcate in them the idea that diamonds were a gift of love: the larger and finer the diamond, the greater the expression of love. Similarly, young women had to be encouraged to view diamonds as an integral part of any romantic courtship.

the agency specifically recommended, “Promote the diamond as one material object which can reflect, in a very personal way, a man’s … success in life.“

To do so, the advertising agency proliferated the myth of diamonds in a number of ways. Their methods can be described as sketchy at best. Propaganda may be a more accurate description.

Movie idols, the paragons of romance for the mass audience, would be given diamonds to use as their symbols of indestructible love. In addition, the agency suggested offering stories and society photographs to selected magazines and newspapers which would reinforce the link between diamonds and romance. Stories would stress the size of diamonds that celebrities presented to their loved ones, and photographs would conspicuously show the glittering stone on the hand of a well-known woman.

Fashion designers would talk on radio programs about the “trend towards diamonds” that Ayer planned to start. The Ayer plan also envisioned using the British royal family to help foster the romantic allure of diamonds.”

The advertising agency created an arbitrary guideline to help young men decide how much to spend – one month’s salary. When the completely random benchmark worked so well, the ad campaign adjusted the number to two month’s salary.

Somewhere between then and now, I’ve heard the benchmark raised to three month’s salary. Whether this was revised by N.W. Ayer or hopeful brides-to-be remains unknown. I’m sure it will be a year soon enough. 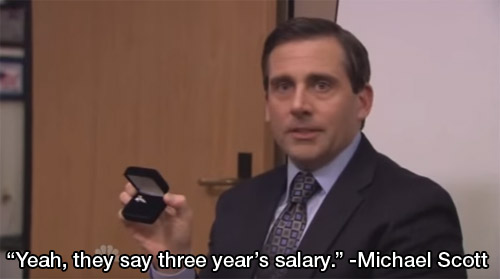 The greatest advertising campaign in history continued for the next several decades. In the late 1940s, the campaign moved from pressuring men to indoctrinating the minds of younger girls. The firm began visiting high schools to hold lectures on diamonds.

All of these lectures revolve around the diamond engagement ring, and are reaching thousands of girls in their assemblies, classes and informal meetings in our leading educational institutions,” the agency explained in a memorandum to De Beers.

The advertising agency explained, in its 1948 strategy paper, “We spread the word of diamonds worn by stars of screen and stage, by wives and daughters of political leaders, by any woman who can make the grocer’s wife and the mechanic’s sweetheart say ‘I wish I had what she has.’“

A Diamond is Forever*

In 1948, the marketing firm coined the term, “A Diamond is Forever*,” and the finances of newlyweds would never be the same.

The campaign worked so well, that from 1939 to 1979, DeBeer’s diamond sales rose from $23 million to $2.1 billion. Today, every young man feels pressured to spend thousands of dollars on a symbol of love. Those who cannot afford the average $6,000 price tag typically delay the purchase, or worse, finance it.

But the De Beers marketing machine continues. A successful investment into the Japanese market has conjured up diamond demand when there was none. In China, 0% of engaged couples partook in the diamond buying tradition during the 1990s. Today, that number has increased to one-third, thanks to an outpouring of marketing dollars into the Chinese markets.

The explosive growth in diamond demand has left several African countries war-torn and with collapsed ecosystems. On average, it takes the extraction of 1,750 tons of earth to mine 1 carat of diamond. If you’ve never seen the world’s biggest hole, allow me to introduce:

And yet diamonds today are more common and unimpressive than ever:

*Remember that study in Part 1 about rates of divorce and wedding spending? It’s true for diamonds too. Couples who spent over $2,000 on a ring were 1.3 times more likely to end up divorced.

Just because something is shiny does not make it worth thousands. Let’s all recognize diamonds for what they are: marketing bullshit, and let’s opt out of their game. Cubic Zirconia and lab created Moissanite are more than acceptable substitutes, for a fraction of the cost.

Then again, there’s always the option of our great grandparents: pretending these marketing materials weren’t created, and recognizing an expensive rock is not a requirement for loving someone.

The title of this series points the blame at diamonds for the rise of the unaffordable wedding. While it’s certainly true that other spending categories have since surpassed the diamond, the fact remains. The De Beers marketing machine directly launched the now deeply engrained link: the more money spent, the truer the love.

In doing so, the diamond conglomerate kicked the door wide open. If the ring was a status symbol, then so was the wedding. With this shift in mindset, the market responded in kind. A parade of overpriced wedding vendors gladly rushed onto the scene, and an eager generation of wedding parties played right into their hands.

Today, the price of weddings is locked in an out of control death spiral. Rather than ejecting from the whole mess, newlyweds continue to dump money to impress a tradition. The dirty secret is that nobody’s even sure where that tradition came from, or why they’re spending what they’re spending. Yet they tilt the nose down, sending their finances crashing to the ground and leaving a financially strained marriage somewhere in the wreckage.

Of course, that’s exactly how the marketers planned it.