If Bruce Wayne were a real person, he’d be Dan Bilzerian.

I thought I was really clever with that intro, until I saw GQ Magazine one-upped me. They describe Dan Bilzerian as, “a kind of Bruce Wayne-meets-Hugh Hefner for the social-media age,” which is much more descriptive and accurate.

The nickname stems from his absolutely mind-boggling number of followers – 23 million.

What’s earned him all these followers?

Unlike the list of people above, he’s not a famous actor, businessman, or athlete. In a strange twist of the internet age, he became famous after he was spotted in the top left of a poker broadcast, with a girl hanging on his shoulder, apparently assigned the important job of stroking his beard.

Since then, he’s gained about 20,000 followers a day, simply by being a rich guy who posts insane photos of his life.

I put the following collage together after scrolling through his page for a little less than 5 minutes: 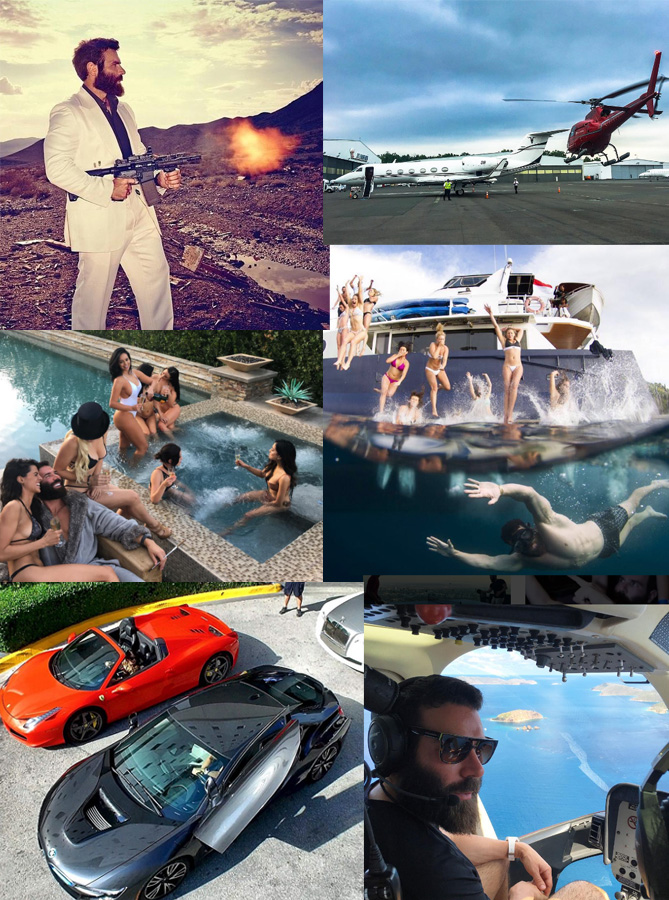 He claims to have earned his fortune as a professional poker player. For the purposes of this article, we’ll roll our eyes at that and ignore that his father was one of Wall Street’s most notable corporate raiders, who wisely set up a trust fund for his sons prior to being convicted of fraud and getting sent to prison.

Wherever Dan Bilzerian got his money, and however likeable or unlikeable you might find him, there’s one fact that remains blatantly obvious:

He’s been around money. More to the point – he has more money than he knows what to do with.

And with that comes a certain level of wisdom about something that so many are endlessly chasing.

So what does our Instagram Batman say when people ask him whether money can buy happiness? In a recent podcast interview, he had this to say:

An example I like to give is when I was 16, my dream car was a Mustang Cobra. So if I got a Mustang Cobra, I would have been at a 10 [on the happiness scale]. But, a Ferrari would also bring me to a 10. And you can’t go higher than a 10, right?

So let’s say that I got the Ferrari when I was 16, and now we flash forward and I graduate college, and let’s say my dad gives me a BMW M5. If I had the Ferrari, now I’m probably going to be at a 7, right? Because I’m stepping down in a car.

It’s the same car. You’re the same person. You’re at the same spot in life. The only difference is your perspective because of your previous experience.”

Dan is voicing what I’ve long hypothesized; money is entirely relative. Trying to reach an ever-increasing amount of it is an exercise in futility.

When people ask why rich people aren’t as happy, I think it’s because they’ve upped the bar so far that only the best things satisfy them.

Another example, when I got out of bootcamp, if I went to Outback Steakhouse I would have been at a 10. Now, if I go to the best restaurant in the f***ing world, I’m at maybe a 6 or 7. I’d just be like satisfied. I mean, I’ve got three chefs, I eat the best food all the time. So that doesn’t make me happy any more.

If someone bought  me a Lamborghini, I’d be like whatever. I’ve had them, I don’t care. But if you give it to the guy off the street he’d be at a 10.

I can’t buy happiness anymore. I’ve bought every f***ing thing that I ever wanted. There’s not really anything that I want. So I can’t buy any pleasure.

And also, if you gave me a regular car, or put me at a regular hotel, I’d actually be below the normal level. Whereas a normal person would just be happy to be on a vacation.

It’s kind of like the guy who wins the lottery.  A year later, he’s statistically less happy than the guy who got his leg amputated the year prior.”

This is a pretty honest confession from a guy who’s entire PR strategic can be summed up as glamorizing the lavish lifestyle.

Why the Rat Race is a Losing Battle – Hedonic Adaptation

What Dan is describing here has already been figured out by science. It’s called hedonic adaptation, and the basic idea is that humans are awfully good at getting used to things.

From an evolutionary perspective, this makes perfect sense. In order for our species to not die out the moment some hardship comes our way, it’s reasonable that we’d come programmed with a little bit of code that lets us adapt to our environment, good or bad.

In fact, Dan’s last comment about the lottery winners is the exact study which coined this term. In 1978, psychologists interviewed 22 lottery winners and 29 paraplegics. In a result that doesn’t get any easier to believe the more I re-read it, within just months of their respective life-changing events, both groups reported similar levels of happiness.

Not quite. It turns out, the lottery winners quickly got used to their posh champagne and million dollar homes, and like Mr. Bilzerian, they actually found less joy in life’s normal things. On the other hand, accident victims found more happiness in life’s ordinary events, and were just as optimistic about their future as the lottery winners.

These things are counter-intuitive to grasp, especially when you’ve been raised in a culture that spends billions of dollars to convince you the latest $19.99 gadget is all that’s missing from your life.

But there’s simply too much scientific evidence to claim otherwise, and too many people at the top of the money mountain, adamant the view isn’t quite as amazing as we’re lead to believe.

“Money Can’t Buy Happiness, But You Can Buy a Boat, and a Boat Would Make Me Happy”

That’s not to say that stuff can’t make you happy, at least for a little bit. The lottery winners really were happy… for a couple months.

The rush of buying a new gadget is real. The trouble is, it’s entirely fleeting, and it can spiral out of control in a hurry.

Experiments show that money elicits similar brain scans as drug addicts high on cocaine. Further research shows a direct correlation that being too materialistic tends to make you less happy.

When we rob from our future to fund temporary happiness today, we’re only digging ourselves a hole.

Just like we don’t all start our days with a snort of cocaine alongside our morning cereal, because we instinctively know that’s somehow damaging to our future, we shouldn’t expect the adrenaline rush of a purchase to provide any lasting level of happiness.

So, we’re left with two choices:

The Lasting Sources of Happiness

What are those lasting factors of happiness? Meaningful work, health, friendships, optimism, and freedom, at least according to the experts.

All those things are available to us, without or without a Dan Bilzerian sized lifestyle.