Hello to all the long time (and many new!) Money Wizards! It’s Net Worth Update time for… August??? When did that happen? Where did the summer go?

Thanks to some strong site growth recently, chances are you’re new around here. If so, consider this my official welcome!

Every month, I get financially naked for my readers in the form of an in-depth net worth report. If that’s not dedication to the cause, I don’t know what is.

I’m not just a sick exhibitionist, and you’re not just a voyeur (right?).  This is all part of a broader plan to track my progress towards nearly one million dollars and an early retirement.

Anyway, lots of fun developments went down in August. This site was featured in Rockstar Finance, my twitter account crested 1,000 followers, and I (finally) stuck to my previously secret goal of two new posts per week. Yes, this is me publicly holding myself accountable to a sort-of-formal posting schedule. In other words, if a week goes by and you don’t see two updates on this site, I fully expect you, my loyal readers, to break out the pitchforks and flood my inbox with hate mail. Deal?

In other August news, I experienced my first trip to the fried-everything-on-a-stick-extravaganza that is the Minnesota State Fair. Every August, the state of Minnesota comes out in droves for what has become the largest state fair in the country. The fair is a two week spectacle which spans from carnival rides to butter sculpture carving, and everything in between. It was quite the experience to say the least, but mostly I was left fighting the urge to spend my entire net worth on a lifetime supply of fresh mini donuts.

Really though, those mini donuts are unbelievably good…

I also dodged the barrage of MyPillow, 5 Hour Energy, and massage chair salesmen who slithered their way into the fair and set up booths at every corner. Does everything really have to turn into a money grab these days?

Earlier in the month, I found myself taking a quick roadtrip to Madison, the capital of Wisconsin.

And I saw a cat play the Cowbell in front of a live audience. Yeah, that one is a long story…

Then then there’s the reason you’re actually here. In August, my net worth increased $3,575! Onto the update. 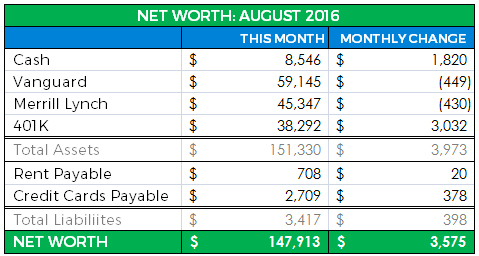 Cash Savings: +$1,820 I’m not a huge believer in emergency funds, so this is about as high as you’ll see my savings ever get. I’m in the process of saving for a new(er) car, hence the cash growth.

I’m also in the process of maxing out my annual 401K contributions, which means nearly 30% of my salary is automatically funneled into my retirement account. Usually this hampers my cash savings, but August turned out to be a good month! Other than my roadtrip, I didn’t do any serious travel, and I also cashed in $187 of credit card cash back rewards.

I consider a good month one which I can save $1,000 cash. Why $1,000? No clue… it sounds like a nice number. Either way, very cool to see my arbitrary goals exceeded for the month.

Vanguard Account: ($449) My Vanguard account value declined a tiny bit in August. After July’s ridiculously crazy run up, I’m not sweating this at all.

I believe in simple investing, and my Vanguard account is laughably simple. No fancy charts or analysis here, my entire account is just two funds. VTSAX, an index fund that tracks the entire stock market, and VGSLX, a Roth IRA which tracks real estate investment trusts.

Merrill Lynch: ($430) More market changes after last month’s crazy run up. I haven’t added any money to this account in years.

The majority of this account was formed when a younger, more naïve version of myself was convinced I could beat the stock market by picking individual stocks. My returns in this account have lagged the overall market quite a bit, and I’d be several thousand dollars richer had I just kept it simple.

BUT, this account was a great learning experience. All of my first investments occurred in here, and the run ups in companies such as Altria and Eli Lily showed me the power of the stock market. Most likely, the thrill of these first few investments are what got me fired up to invest more and more money. Today, the account consists mostly of low fee, exchange traded funds (ETFs) and a small percentage of individual stocks.

401K: +$3,032 A-ha, finally we get to the bulk of this month’s net worth increase. Although the market stayed relatively stable for the month, this account sails on.

As I said earlier, nearly 30% of my paycheck is automatically invested into my 401K, and coupled with the incredible power of the employer match, the continued upward movement of this account never ceases to surprise me. I’ve said it before and I’ll say it again, choosing to max out my 401K is the single most powerful wealth building decision I’ve ever made.

Rent Payable: (+$20) Guess we ran the old air conditioning quite a bit this month. This expense should decrease as summer comes to a close.

I rent a modest two bedroom apartment with my girlfriend near Minneapolis, Minnesota. Apparently a lot of people are afraid of snow, which allows this native Texan to enjoy a pretty low cost of living.  My rent today sure beats the $1,300 per month I was paying for a 1 bedroom, suburban Colorado apartment.

Credit Cards Payable: (+$378) The biggest area for improvement here is my absolutely ridiculous restaurant spending in August: $269 for the month! Delicious meals out have always been my one spending weakness.

This amount would have been slightly less, but as I mentioned last month, I prepaid some more expenses for a January trip to my dream ski location: Whistler, British Columbia! Somehow out of our massive group of friends, I was the guy stuck fronting the money for the ski-condo, and I’ve got the credit card bill to prove it. Ah well, I know my friends are (eventually) good for it, haha!

Calculate Your Own Net Worth

If you’ve never calculated your net worth before, or even if it’s just been a while since you’ve checked, give it a shot! Log into all of your bank accounts, dust off your 401K account information, search for cash under the couch cushions, and subtract your outstanding debts.

Analyzing your net worth can be an enlightening exercise, and you just may surprise yourself.

So alas, as the sun sets on yet another Net Worth Update, I leave with you with an only fitting photo of the sunset, taken at the State Fair. 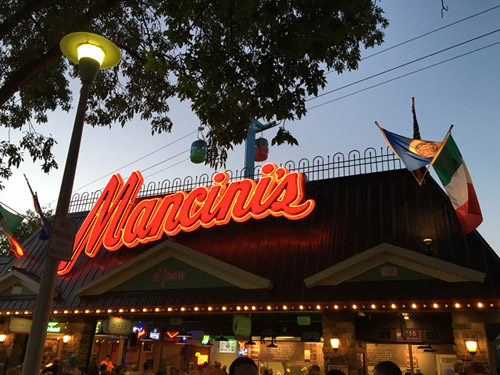