Earlier this month, the sun decided it was time retire Minnesota’s dreary winter clouds, and the leaves decided it was time to bud from the trees. I took the hint, got myself outside into some beautiful Spring weather, and began one chore I can actually get behind – Spring cleaning.

For this bout, I was tackling our gas grill. Long time readers might remember that two years ago, almost to the day, I picked up this beauty off Craigslist: 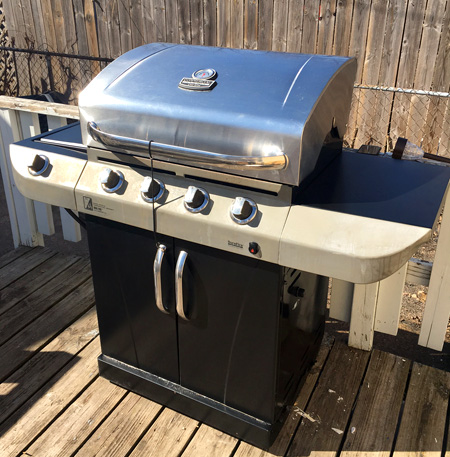 At the time, I boasted about what a steal I’d found. As I undertook the first true deep clean in my ownership’s history, I realized why the grill was probably so cheap…

Tons of inside parts were totally rusted out.

Whether I’d picked up a lemon or I’d caused its early demise due to a lack of maintenance, I’m still not sure.

Nonetheless, I knew what my next steps had to be. She was beyond repair, or at least any amount of repair that my unhandy self was prepared to deal with.

So, The Craigslist Grill and I said our farewells. As a last ditch effort, I put her back on Craigslist, this time for just $20.

I figured it was a lost cause, especially since I’d fully disclosed which parts were 100%, totally, completely… Rusted. Out.

To my shock, somebody quickly responded with interest. Apparently, he didn’t care about the rust one bit, and instead was interested in the working parts for a similar grill he had. He planned on scrapping the rest for metal.

As I rolled her to the curb, rusty parts and pieces literally began falling off one by one. A rusty screw here, a whole support beam there. I laughed at the dramatic disintegration, and then took solace knowing I was definitely not parting ways too early.

It wasn’t until the happy new owner eagerly handed me a $20 bill that I realized what just happened.

I’d looked up the grill in question when I originally bought it off Craigslist. It was a Char-Broil professional chef series, complete with dual-fuel and a whole bunch of other fancy features.

I’m not really sure what any of that means, but I could understand the price tag: $400, if I bought it new.

On first glance, a rusted out grill after just two seasons might sound like a huge fail. And truthfully, it’s pretty close to a worst case scenario.

But what happened? For two seasons, I had a great grill that cooked up many-a-mouthwatering and perfectly charred steaks, chicken breasts, and roasted veggies. And it cost me just $10 a year.

Compare this strategy with the average consumer’s.

Take a stroll through any new grill showroom and you’ll see the cheapest new grill still costs an impressive $300. The average model seems to be about $600, and some go all the way up to $2,000 or more!

Now consider that the average American, who like me is apparently too lazy to do basic maintenance, replaces their grill every three years, according to Consumer Reports.

This means the average person is spending anywhere from $100 to $600+ per year to own their grill!

How to use Craigslist as a library for cheap (or free!) stuff

I quicky realized how often I unintentionally use this strategy.

I could go on and on. (And we’re not even talking about taking this strategy to the next level level by flipping furniture for profit.)

How is this possible?

When you buy used, in most cases, whatever you’re buying is already fully depreciated.

Whether you use it once or use it until the insides rust out and you can’t even wheel it to the curb, in most cases, the change in price you paid versus the price you can sell it for in the future is pretty minimal.

Compare this to buying new, when driving the proverbial car off the lot results in an immediate and unrecoverable hit to the resell price.

This means that for used stuff, the purchase price isn’t really a purchase price. It’s more like a hold, or a deposit that you can redeem once you’ve finished using it.

Using this strategy at scale, you’re essentially buying everything for free. Played correctly, you can reduce your consumer spending to near zero.

Considering the average person spends thousands per year on stuff, this unlocks thousands of dollars for yourself.

Say you’re currently saving $15,000 a year, and you use this strategy to avoid two big ticket purchases, like a set of skis and a new sofa. That $2,000 saved is equivalent to getting a 13% raise at work! (Or closer to 20% if we consider income tax!)

That’s an extra 10-20% that could be saved and invested towards early financial freedom, or even just earmarked away from boring purchases and towards splurges that you actually care about.

Bonus: This strategy lets you enjoy $1,000+ luxuries for pennies.

Counter intuitively, this strategy often results in enjoying better stuff than if you were to buy something brand new.

For example, when my hours upon hours of blogging meant it was finally time to upgrade my home office furniture, I was surprised to realize that I could literally buy the best, most comfortable office chair ever made for cheaper than if I went with a new “value” purchase.

Here’s the specifics: The Herman Miller Aeron is an office chair that costs an absolutely astounding $1,500 new. (Yeah, I couldn’t believe it either… until I sat in one…)

But interestingly, these chairs can also be had all day for anywhere from $250-400 used on Craigslist or Facebook Marketplace. And what’s even more interesting is that whether those used versions are nearly spotless or have a giant knife slash down the middle, they don’t seem to fluctuate much in cost.

So, I found myself a pristine refurbished one for $350. Because these things are made like tanks, they’ve got an average life expectancy of anywhere from 10-20 years. After which, I could just sell the chair for around $250.

Total cost to enjoy a $1,000+ luxury? $5-10 a year… which surprisingly, is far cheaper than some new, cheap piece of junk that won’t last half as long.

In conclusion, here’s the easy 4 step process to renting stuff for basically free…

I planned on continuing this post, but that’s literally it. The process couldn’t be easier.

The hardest part is avoiding the temptation to buying something sparkling new, and instead realizing that: