Being rich and being wealthy… same thing right?

Most people don’t realize this, but the two have one extremely important difference.

Understanding that difference is huge key to reaching financial freedom. (And for fun, learning how your average teacher can be wealthier than an NBA All-Star.)

We’ll get to that mind-bending comparison in a minute, but first we’ve got to start with two important definitions.

The definition of rich:

You probably don’t need anyone to explain this to you. Rich people have a lot of money. Duh.

A doctor is rich. An actor is rich. A professional boxer who just cashed his $25 million pay-per-view check and is ready to add a giraffe to his tiger collection is definitely rich.

The definition of wealthy:

Here’s where it gets interesting. Wealthy people have a lot of money too, but they may or may not have the in-house menagerie.

That’s because wealthy people have something that doesn’t necessarily come with being rich.

The subtle difference between being rich vs. wealthy

Did you catch the difference?

It’s kind of like when your mind was blown in fifth grade math class, and your teacher told you that all squares are rectangles, but not all rectangles are squares.

All wealthy people are rich, to some extent. (At least, they could choose to be if they wanted to.)

But not all rich people are wealthy.

That’s because building wealth, not riches, is another step up in the game of money.

Getting rich comes first. And in most cases, it’s mostly a game of following the crowds.

You go to a good school, accept the highest paying job, and devote your life to a career.

Of course, there’s a few alternate paths. Maybe you’re born with the ability to punch harder than anyone in history, and before you know it, you’ve got a $25 million fight purse falling into your lap. Or maybe you win the lottery.

Isn’t that how all the lottery winners always phrase it? “I’m gonna win that lottery and be rich.”

The strange part is that for most, getting rich enough to impress your neighbors comes mostly from either taking advantage of a break or floating through life, doing the best at whatever you’re told.

But here’s the problem. Unless they’re one of the previously mentioned lottery winners, most people are actually trading their time to get rich. They work long hours, devote themselves to professional certifications, and then work even more long hours.

They trade all this time for rich incomes. And they use their income (aka converted time) to buy things that most often, require even more time. A big house, a fancy car, a boat or two. Before they know it, those rich purchases have addicted their owners towards a dependence on a specific income level.

So they continue trading more and more time to maintain their “rich” status. But without ever stopping to build wealth, they’re still stuck on the never ending spin of the hamster wheel.

Level 2) Kicking it up another notch, and using your riches to build wealth

As Robert Kiyosaki says, wealth is measured in time, and not dollars.

Certain people become rich overnight, or even accidentally. Nobody gets wealthy on accident.

That’s because unlike getting rich, building wealth requires even more careful planning. It requires critical thought, and breaking free from the norm. To get there, you have to look around at your surroundings and actually plan for the future.

This stops most rich people right in their tracks.

Someone focused on building wealth might trade their time for income like everyone else, but the wealth builder views it as a temporary sacrifice. Because they’ve broken through the rat race of riches, they find a higher purpose for their time for money exchange.

That purpose? Using their income to invest into building wealth. (And buying time.)

They put their money to use not on fleeting materialistic junk, but into productive investments. Those investments start working for their owners, spitting off more and more income, which only serves to buy their owner even more time.

Instead of increasing their spending requirements, they’re building themselves a fortress of security. The wealthy person is giving themselves options, while the rich person is only cutting their options down.

How a school teacher can be wealthier than a professional athlete

In 1996, Antoine Walker was drafted as the sixth overall pick in the NBA draft.

At 6 feet 9 inches tall, he had a body built for basketball, and the skills to back it up. He’d just left college, where he’d won the NCAA National Championship as a 19-year-old.

Also in 1996, Sally Teacher just graduated from the same college as Mr. Walker. Unlike Antoine, she could barely dribble a basketball, and nobody knew her name.

While Antione was busy getting showered with praise and signing his million dollar signing bonus, Sally Teacher was unceremoniously accepting her first job at an elementary school, making just $40,000 a year.

Over the next 13 years, Antoine Walker went on to win an NBA Championship and become a three time All-Star. In that time, he earned over $108 million dollars.

Antoine was balling in more ways than one. He was rich!

During the same time period, Sally Teacher settled into her teaching position. After the first year on the job, she married her high school sweetheart, also a teacher. The two climbed through the school system together, gaining modest cost of living adjustments along the way.

While Antoine spent his time buying $400,000 cars, flashy jewelry, and not one, but four different homes, Sally Teacher and her husband lived frugally on just $30,000 a year, investing the difference into a basic 3 fund portfolio.

While they didn’t get the benefit of a quarter million dollars worth of bling-bling, they still enjoyed a happy home, delicious meals, and plenty of travel during their summer vacations.

You can guess how this true story ends.

In 2009, Antoine Walker was arrested and charged with three felony counts for writing over $1 million in bad checks to Las Vegas casinos. (True story)

By 2010, he was filing for bankruptcy. (Like 60% of former NBA players) The court records show he had Total Assets of $4.3 million, which sounds great until you realize he also had $12.7 million of debts. The situation was so bad, he couldn’t even afford the fee for his bankruptcy attorney. (He got his friend and teammate Nazr Mohammed to foot the bill.)

Sally Teacher? Her and her husband had been slowly but steadily building wealth while Walker was writing all those checks. Their $45,000 of savings each year for the past 14 years had earned 7% in their portfolio of index funds. 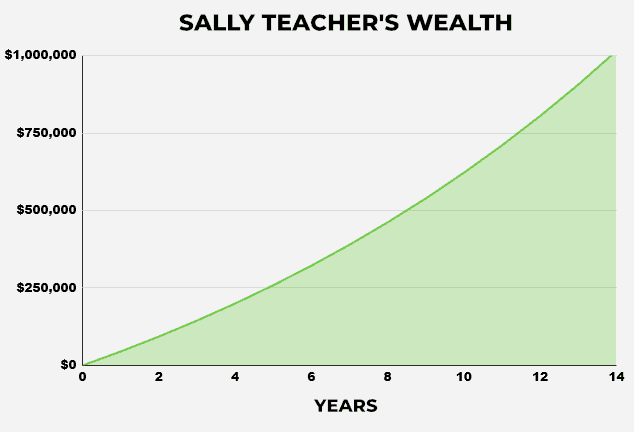 Sally Teacher and her husband didn’t just end this story with $1 million more than Antoine Walker (despite earning about $107 million less than him).

In case this inspiring story/cautionary tale wasn’t enough to convince you, here’s the icing on the cake.

In the United States, the government punishes you for being rich.

That’s because you’re taxed based on your income. The richer you are, the more you pay. The richest portion of the population must pay the government a shocking 37% of their earnings.

By comparison, the government rewards you for being wealthy.

Most interest you receive on that wealth (usually known as “qualified dividends” if it’s paid from a stock or index fund) is taxed at no more than 20%, no matter how wealthy you are. If your wealth is tied up in real estate, that property tax rate is even lower, and most rental income can be partially offset with generous deductions.

In fact, a savvy person who’s devoted their life to building wealth, not riches, can actually earn $101,200 per year and pay ZERO taxes.

Feeling motivated to get wealthy yet?