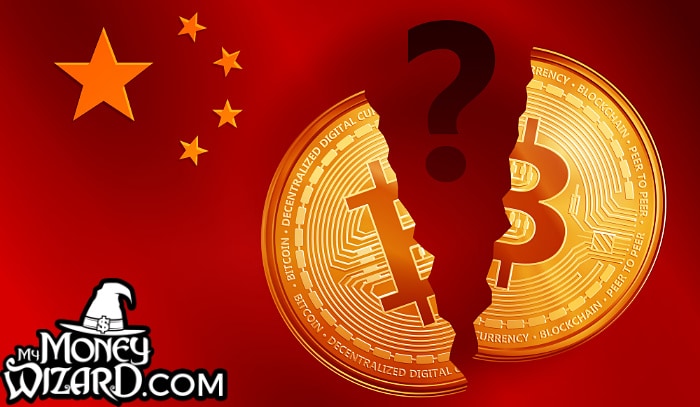 The latest news from the My Crypto Wizard newsroom:

The details are somewhat nuanced, so we’ll get into that.

Plus, I’ll explain why one billionaire says it’s actually a good thing for bitcoin.

The Details of China’s “Bitcoin Ban”

Specifically, per Rueters.com, they “Banned financial institutions and payment companies from providing services to cryptocurrency transactions.”

Basically, banks and financial platforms in China are no longer allowed to help their clients set up cryptocurrency accounts. Nor can they buy, sell, or trade cryptocurrencies in any way.

Put another way, if you live in China, you can still own bitcoin and other cryptocurrencies. BUT…

It’d be like if the U.S. Government came out and said that owning stocks isn’t illegal, but at the same time they shut down the New York Stock Exchange, took Vanguard and Fidelity offline, and forbid U.S. businesses from issuing any new stock.

At that point, it’d be nearly impossible to buy or sell your stocks.

And if you happened to be employed as a stockbroker, you’d be S.O.L. You might even consider fleeing the country to a place where you could still legally make money. (We are kind of seeing this with the firesale of Chinese cryptocurrency mining equipment, or Chinese miners fleeing their country to go set up their bitcoin mining business elsewhere.)

Why is China Banning Bitcoin?

The official statement from the People’s Bank of China says something about the the scary rise and fall of cryptocurrency prices, which is “seriously infringing on the safety of people’s property.”

The Chinese government also mentioned something about the concern of bitcoin mining on the environment.

If you ask me, that all sounds a little shady. China’s communist party doesn’t exactly have the best track record of caring about their people’s safety or property, and they’ve also earned a gold star through the years for their blatant disregard of the environment.

So what’s really going on?

I did some digging, and came across some interesting comments from one of the world’s biggest bitcoin investors, Michael Saylor.

Saylor is a technology investor famous for calling the rise of Apple, Google, and Facebook, and he recently made waves when he announced that he bought $2.1 billion dollars worth of bitcoin.

(A move which earned him the hilarious nickname of “Diamond Nuts” among bitcoin enthusiasts.)

Take his thoughts with a grain of salt, since his $2.1 billion bitcoin investment could obviously make him more than slightly biased. Then again, his past success investing in technology is nothing to sneeze at…

On a recent podcast, Saylor had this to say about China’s bitcoin ban:

Look the real story is capital controls in China.

The Chinese don’t want capital to flow out of their country. They’ve got a closed economic system.

I remember going to China, and I would sit with business people, and they would say, “You know you should take your company public on the Chinese stock market, because you would get a 40 multiple instead of a 10 multiple*. But the one problem is that you can’t get the money out of China.”

*If you’re not up on your finance terms, “P/E” and “Multiple” are referenced to company prices relative to their earnings.

Saylor is saying that because the Chinese government runs such a closed economy, the Chinese people have less options of things to invest in. So, their Chinese dollars flow overwhelmingly to the limited number of Chinese companies, which bids their prices up. It makes the companies “worth” more money, on paper, but those investments are stuck in the Chinese economy forever, because the government won’t ever let the money leave.

I think that at some point, the Chinese decided that there was too much potential for capital to flow out.

One way to evade the capital control is to buy bitcoin mining equipment and then mine bitcoin, and then you’ve got hard currency.

The other way would be to trade bitcoin.

Look if you’re a Chinese billionaire or a Russian billionaire, what do you want to do? You want to get the money out of the country.

Why did the Russians always own yachts? It’s floating capital. I put the money in the boat, I float the boat out of the country.

I really think the #1 thing is they want to control the capital.

The problem in China is that someone can convert Bitcoin to Tether* and then Tether can cross international boundaries.”

*Tether is a cryptocurrency that mimics the value of 1 U.S. Dollar.

Saylor is saying that bitcoin represents an obvious loophole in the Chinese government’s plans of a controlled economy. No matter what the government says, someone mining or trading bitcoin could simply convert their bitcoin to a cryptocurrency equivalent of U.S. dollars, and then send it out of the country within seconds.

For a simplified example, it’d be like if you were trading stocks and you sold them all for cash, then wired the money from your checking account to another country.

Personally, I agree with Michael Saylor.

As my good friend Judge Judy once told me, when something doesn’t make sense, it’s usually not true.

It doesn’t make sense that the cold-blooded Chinese government cares so much about the well-being of their people that they’d ban an investment that’s up 254% in the past 12 months.

It makes way more sense that a government hell-bent on controlling everything doesn’t like the idea of the most uncontrollable currency in history.

Saylor also says this could be a good thing for bitcoin, and I agree.

For years, one of the most common conspiracies about bitcoin was that the whole thing was some sort of secret operation from China to overthrow the U.S. Dollar.

And I gotta admit, the facts were enough to give me pause.

As the conspiracy went, the Chinese government (and its people) would continue to mine and obtain Bitcoin faster than anyone else, eventually impose some sort of economic warfare on the U.S. to crash our economy, and then if bitcoin ever became the new top dog on the world’s economic stage, China would be perfectly positioned as the new richest country in the world.

But China’s recent actions pretty much shatter that conspiracy to pieces.

The Chinese government is forcing their country’s bitcoin mining operations to either shut down or flee the country, meaning that overnight, the percentage of the world’s newly minted bitcoins going into China plummets from 75% to zero.

And no longer can their citizens easily obtain the currencies through investment, either.

Now, if bitcoin does eventually become the revolution some people think it might be, the country that benefits certainly won’t be the one that banned it!

All in all, this news eliminates the risk that bitcoin is some sort of Chinese warfare machine. To me, it makes it even more obvious that bitcoin is looking exactly like what all signs continue to point towards: a revolutionary asset class.

We can’t end this article without noting that China has the magic touch for banning stuff that’s gonna be huge. Since 2007, the Chinese government has systemically banned Google, Facebook, Instagram, YouTube, Snapchat, Twitter, Reddit, Dropbox, Quora, Wikipedia, and Discord, and we all know how those companies turned out.

Not to mention, since the Chinese government is essentially forcing millions of Chinese investors to sell their bitcoin, the news has also helped (temporarily?) crash the value of bitcoin, making the stuff 50% off for investors living in countries that haven’t banned it.

PS – If you’re interested in crypto*, investing through my referral links to Kraken, Ledger, or Trezor helps this site immensely!

*Disclaimer: I’m not a pro, and nothing in this post is financial or investment advice. Always do your own research.