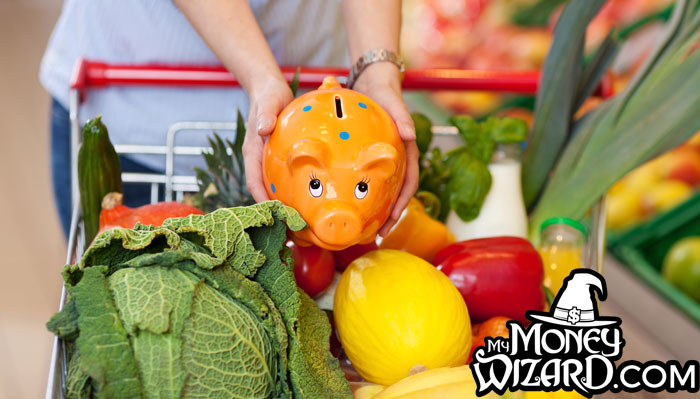 A few months ago, I shared how I spend less than $35 a week on groceries. Since then, it’s become one of the most popular posts I’ve ever written.

While I hope that seeing the final shopping list and cost was valuable, as I wrote the post, I quickly realized there’s way too many subtle hacks going into that final number for just one article.

So today, we’ll zoom out and look at the underlying strategies that anyone can use to slash their grocery spending.

If you implement even some of these 15 tips, you can definitely cut next week’s grocery bill down to less than $5 a day.

1. No gourmet grocery stores until you’re a millionaire

Around here, the most popular version of a gourmet grocery store is a local co-op called Mississippi Market. And their prices are ASTRONOMICAL.

Every once in a while I’ll step inside one of these just for a good laugh. $8 per pack of mushrooms? Chicken breast at $9 a pound? Steak at $19 a pound??

If you’re already a millionaire, feel free to spend thousands of dollars a month to chase the potential health benefits.

For the rest of us still trapped in a day job, I’m guessing the stress of adding years to our working careers is far worse than eating eggs from chickens who didn’t receive daily massages.

If you’ve never done it before, spend an afternoon comparing prices. Make a list of the 10-20 items you most commonly buy, and record their price at the 3 or 4 grocery stores closest to you. You’ll be amazed how much the prices vary!

I’m a huge fan of Aldi, whose prices are low. Like, unbelievably low. In most cases they even mop the floor with Costco. Clean up on aisle Whole Foods!

PS – Don’t skimp on the ethnic supermarkets. Some of their prices are insanely low, and recent reports have shown they’re usually even more local and organic than the fancy places.

Similarly, even if you’re shopping at the cheapest store around, buying premium cuts of meat all the time means you’ll be spinning your wheels.

I get it. It’s nice to treat yourself, and even the most expensive meal at home is usually cheaper than going out. But again, until you’re a millionaire, let’s reign it in a little.

This opportunities for substitutes get even bigger when you consider the recipe.

For example, if you’re cooking a standalone steak and it’s the star of the show, splurging on a premium cut might make sense. On the other hand, if you’re putting together quick beef tacos smothered in cheese, veggies, and salsa? You probably won’t be able to taste the difference anyway.

3. Take advantage of easy to use coupons

Clipping coupons is for grannies. I much prefer the high tech way of doing things.

Ibotta is an app that will let you score deals on all sorts of everyday grocery items. I especially like that their deals aren’t limited to the usual coupon junk food, and instead they often run deals like $0.25 off bananas or milk.

(And they even pay out through Venmo, so it’s super easy to claim that cash.)

Plus, if you sign up through my link you could earn up to $20 in free cash!

4. Seriously consider whether you’re eating too much

Nearly 75% of Americans are overweight, and most all of us could stand to lose a pound or two.

This isn’t a fitness blog, so we won’t get into dieting strategies. But here’s the oldest one in the book: eat less.

Money doesn’t matter if we’re not healthy. Ironically, being healthy also saves money, both in grocery spending and healthcare costs down the line.

I’ve talked about this before, but that “common knowledge” about breakfast being the most important meal of the day is based on a study sponsored by…

Instead, I just skip “the most important meal.” This makes actual healthy activities, like intermittent fasting, shockingly easy.

As a bonus you’ll only have to fund two meals a day instead of three.

If you’ve never tracked the price of produce over the seasons, you’ll be amazed how much the cost of fruits and veggies swings over the year.

Even worse, if you’re buying Grapefruit during the Minnesota winter, it’s probably getting shipped across the country from Texas. What do longer travel times mean? Not only will you spend more money, but once you bring it home, that produce will go bad faster.

Learn what’s in season in your area, and you can slash 15-20% off your produce cost without even trying.

7. Don’t forget to eat the food you buy!

Speaking of food going bad, study after study shows that as much as 40% of food in America goes uneaten.

Personally, I know I throw out far more spoiled produce than I’d like to admit. And even the occasional pantry item that’s somehow buried in the back behind a shelf.

If you buy something, commit to actually eating it! It will save your wallet and the planet.

PS – The freezer is your friend here.

8. Learn how to cook (and not just blindly follow recipes)

Most people spend their whole lives without ever really learning how to cook, and that’s a costly mistake.

Stop me if this sounds familiar. You pull up a recipe and begin making the night’s dinner. But a few steps in, you realize you’re missing one of the ingredients. So, you run to the store, only to realize what you thought was a small, cheap ingredient costs an annoying amount of money!

These little $5 to $10 dings are akin to death by a thousand paper cuts for your grocery bill.

The solution? Learn how to cook.

Rather than policing your recipes like a North Korean dictator, give yourself permission to experiment. Learn why a recipe works.

Personally, I didn’t learn how to cook until I gave myself permission to fail.

If you start understanding the underlying ingredients, you’ll begin to realize what can be substituted and what cannot. Even better, you might even start making your meals based on what you have on hand, rather than what a recipe book tells you to buy.

Once you’ve done that, it’s like unlocking a cheat code on your grocery bill.

Obviously, if you have celiac disease, you don’t have a choice here.

But for everyone else, consider the cost. A recent study from the NCBI found the average Gluten Free product cost, wait for it… 242% more than the regular version!!!

For the price, you’d think that “GF” logo cured cancer. But consider this, straight from the source:

The gluten-free diet is healthier for people with gluten-related disorders (celiac disease or gluten sensitivity), but there is no evidence that it is beneficial for people who do not have these conditions.” – Gluten.org

Even worse, most people buying Gluten Free don’t even know what it means.

Save yourself the upcharge, and just go for the standard option.

10. Meal plan ahead of time

For me, this has probably been the biggest factor in sticking to a healthy, affordable diet.

Personally, if I don’t spend a day early in the week writing out all the meals I plan on making, the wheels inevitably fall off. Before I know it, I’ll have takeout dinner streak that makes these bored golfers proud:

Find a routine and stick with it.

For me, that means making a list of dinners every Sunday. I try to brainstorm five full meals, so that I still allow myself the weekend to eat out and preserve my sanity.

When I started seriously tracking my grocery spending, one of the most shocking things to me was how much I was spending on things completely unrelated to my original shopping list.

I’d walk into the store on a mission to buy lettuce and chicken breasts, and somehow I’d walk out with lettuce, chicken breasts, some tasty looking chips, a new flavor of soda, a frozen meal with a mouth watering picture on the front, and about a hundred other impulse buys.

One trick I’ve found to help stay on track – For the love of all that is good, do not go to the grocery store hungry. Eat a snack if you have to, because walking in with a rumbling stomach will have you walking out with an empty wallet.

12. Shop the outside aisles

One of the most subtle sources of savings has nothing do to with what you buy. It’s what you don’t buy.

A good hack to measure this is to track how many things you’re buying from the outside ring of the grocery store versus the inner aisles. That’s because grocery stores place the processed junk smack in the center, hoping you’ll cave as you meander down the aisles.

Stick to the outer aisles, aka the real food, and you’ll stay healthier AND wealthier.

13. Put the blinders on at the check out aisle

Speaking of sticking to the list, there’s one spot that’s worse than any other when it comes to the impulse buys – the checkout aisle.

This isn’t a secret. Grocery retailers know you’re a captive audience when you’re stuck in line, so everything surrounding you represents the highest margin items in the whole store.

14. Fabricate your own protein

Money Wizard Chris pointed this one out:

Learning to fabricate your own proteins can help slim down your bill even more! Just look at the two pork products you listed above: Chops: $2.89 Whole Loin: $1.89. The only difference is a single knife stroke…”

Here’s a good how-to article explaining how to break down a whole pork loin.

PS – the same strategy can be applied to whole chickens or other poultry. Some extra-frugal readers have even been known to buy a whole cow! Seriously!

15. Don’t drink away all your money

Pomegranate juice that costs more than a Chipotle burrito, anyone?

I didn’t realize it until a reader pointed this out, but a huge hack I use to keep my grocery spending under $35 a week is so simple, anyone could do it.

Outside of a few breakfast teas and the occasional brewery meetup with friends, if I’m at home, I only drink water. It’s healthier, cheaper, and easier.

If you live in a place where you don’t trust the tap water, a Brita filter will pay for itself in a matter of weeks.

Do you use any of these grocery saving tips? Do you have any other tips that aren’t listed? Let us know in the comments below!

PS – If you need a little help tracking your grocery spending, I continue to recommend Personal Capital.

I track my net worth and spending every month, and I share all the details (even when they're not pretty) here: Current Net Worth: $353,011