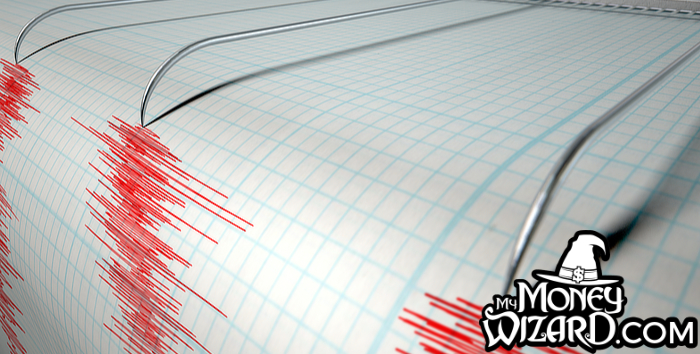 Disclosure #2: (Blame the laywers…) Nothing on this website should be considered financial advice. I’m just a guy spouting his opinions. Make sure to do your own due diligence prior to making any investment decisions.

Sure, the exact moment often surprises the scientific community. But the early signs are there, nonetheless.

While these signs might not be able to predict an earthquake down to the exact date and time, these factors do give a pretty good indication of the probability of a quake hitting a certain area.

And when it comes to the earthquakes in the financial world, we might have just had our “birds fleeing the trees moment.”

At the risk of being one of those chicken-littles, this post will take a look into:

Since you might not have the desire to read 2,200 words about the economy (who can blame you?) feel free jump around using this table of contents:

What’s a Yield Curve Inversion? And Why Should We Care?

We’re gonna simplify things for a second, but just roll with it.

In a normal economic environment, investors look for higher returns the longer an investment’s  “lock up” period.

That’s a neat financial concept that professors like to boast about, but nobody needs so much as a textbook to understand.

Now say I have two options for an investment. Consider these investments something like a fixed bond, or a Certificate of Deposit at a bank (where you’d pay a premium for withdrawing your money early).

Which would you rather put your money into?

In a normal economic world, you’d choose option A every day of the week, and twice on Sunday.

Why? It’s just like your deadbeat friend Brad asking for a 10 year loan – If your money is locked up for 8 years longer, you want higher annual returns to compensate you for all the crazy stuff that could happen over a 10 year time-frame.

With Option B, your money is not only locked up for longer, but you’re earning 1% less per year, too.

So, what type of economic world would we be living in if investors across the board considered options A & B to be equal?

That would mean investors were really, REALLY concerned about the upcoming two years. So much so that they’d be willing to lose money (relatively) to avoid dealing with the short term entirely.

And it just happened…

Why you should care about the recent yield curve inversion

This serves as a pretty good indicator of overall investor sentiment, since the exact yield on bonds comes from a complex bidding process of all interested bond investors.

Investors first started showing their anxiety about the short term back in May, when the 3 month government bonds were paying more than 10 year government bonds for the first time since 2007.

But one data point isn’t all that reliable, which is why I take more stock in the research pointed out in this great post by my new blogging buddy from FatTailedAndHappy.com.

He found that an inversion between the 10 year/3 month yield curve has led to a recession 7 out of the last 9 times it’s ever happened. (With an average time from yield curve inversion to full-blown recession of 14.1 months)

This is pretty crazy. The inverted yield curve is the sort of Upside Down world that would make Stranger Things proud.

And when those guys start panicking, that panic tends to spread to them and their friends. (Aka the guys actually moving money around and whose millions of combined actions drive the markets themselves.)

Why a recession would not be a surprise

This shouldn’t come as a shock to anyone.

Right now, we’re in the middle of the longest economic expansion in history. (Or should I say, near the end? At least if the metrics are right…)

Seriously, that’s not an exaggerated statement. The economic expansion since 2009 is literally the longest on record, or at least dating back to World War II. (123+ months long – roughly a quarter of a year longer than the decade long expansion prior to the bursting of the dot com bubble in 2001.) 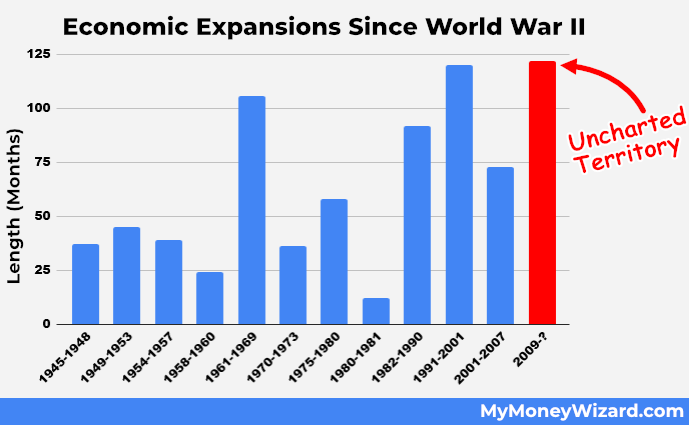 While it might be nice to imagine the good times lasting forever, that’s just not the way the business cycle usually works.

Things expand and things contract, and right now we’re sitting on a decade of unrestrained growth.

So this is a guarantee? Time to live in a cave for the next 14.1 months?

Using an analogy from the world of cheap plastic toys, this yield curve inversion is sort of like the Magic 8 Ball.

Dear Magic 8 Ball: Do we expect a significant stock market correction before 2021? 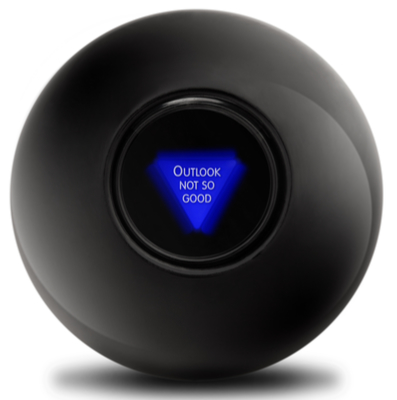 Okay, that’s a silly analogy, but it’s actually not a bad way to think about this situation.

Because we know any “leading economic indicator” or back-tested metric should be taken with a healthy shot of skepticism and maybe a grain of salt on the side.

With the stock market, you can cherry pick any set of data to prove just about anything. (Hence the reason for all those “Amazing stock picking system JUST DISCOVERED! Buy now!” nonsense programs you see advertised.)

And yet, just like the Magic 8 Ball, even if we think the whole thing might be nothing more than hocus-pocus, we still can’t help but stop and think for a second. Or knock on the nearest piece of wood, even if we feel a little silly while doing it.

My take on it all

Personally, yield curve inversions are actually the one market predicting metric that I personally believe in the most. As do a lot of esteemed economists.

I also think these things tend to become self-fulfilling prophecies.

Because as I type this, there’s lots of other investors like myself, who see the yield curve inversion and start wondering if it’s finally time to build up a little larger cash base than they otherwise would.

I’m guessing there’s also businesses executives who see the same yield curve inversion and wonder whether it’s time to rewrite the annual business plan with a lean towards safety.

As those dominoes tip over across an economy of 350 million people, an economic downturn creates itself.

All that said, I’m just one guy. And economists make an entire career of being wrong all the time.

So, can I offer you a grain of salt with that prediction?

How I plan to prepare for a potential market correction

In light of the news about the inverted yield curve, I thought it’d be a good time to dust off Personal Capital and take a good hard look at where my portfolio is, and where I want to be.

I had to ask myself some hard questions, like:

As I write this, my net worth has already fallen around $10,000 this month (~3%) and my allocation across my investment accounts is roughly:

Then again, I also currently hold another ~$10,000 of cash in my checking account. So, my total allocation is actually:

And of course, there’s always the wildcard of a modest 5 figures of MyMoneyWizard.com profits, sitting in a separate business account. I never include this in my net worth updates, because I intend to reinvest that money back into growing this site. But if things got wild enough, and/or a recession presented too many juicy investment opportunities, I could always divert some of those earnings towards stocks or real estate investment.

How I feel about my current allocation

Well, my total stock allocation is about 73.5%. (Plus 15% of REITs which are more correlated with the stock market than the “real estate” part of their heading may suggest.)

(Personally, I think the chances of a stock market correction being as quick and drastic as 2008 is unlikely. 2008 was unlike anything the market had seen in nearly 100 years. The chances that happens again just 10 years later seems slim. I’d argue people who do expect that are suffering from the Recency Bias phenomenon.)

In any case, a nearly $100K drop in net worth would sting, big time. But, it’s not as quite bad as I expected. Overall I feel relatively comfortable with this, especially given the possibility that I’m wrong with my prediction and those stocks keep going up.

Plus, I’ve accidentally built up a $25,000 cash position back from the days when I was seriously searching for a rental property. Although it doesn’t look like that real estate dream will pan out due to a lack of attractive deals in my area, it’s nice to have lucked myself into a somewhat more conservative asset allocation.

My surprise finding from this exercise?

The amount of comfort this cash position brings me, given my risk tolerance and the current economic environment.

Longer term, I think an allocation of… 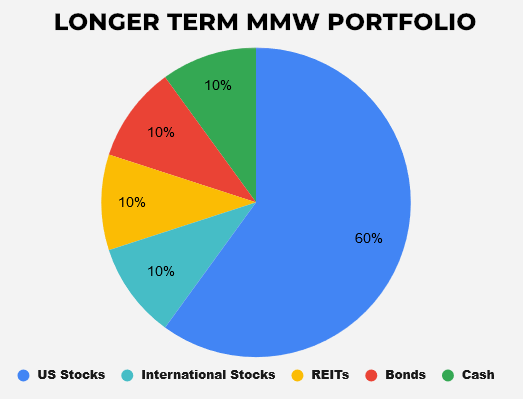 …makes a lot of sense given my current position.

A few random notes on this strategy:

How You Should Plan for a Potential Market Correction

The above is just my approach. My answer would be completely different if I was in a different stage of the journey.

In either case, it’s worth noting that from a wealth building perspective, stock market corrections and recessions aren’t to be feared.

Played right, they can actually be one of the best wealth building opportunities you may ever come across.

Personally, a huge reason I was able to hit the headline-grabbing accomplishment of $100,000 of net worth by age 25 stems back to the discounted stocks I invested in through the trenches of the 2008 recession.

That said, dark-cloud predictions like an inverted yield curve are the perfect time to re-evaluate your risk tolerance.

And I mean, REALLY evaluate.

It’s easy to tell yourself that you’re going to stick out a recession.

It’s a whole different ballgame to actually stick out a recession when the portfolio you’ve worked so hard to build for years is slashed by 40% in value overnight. And the job you’ve spent so much time complaining about suddenly looks like a lifesaver in the wake of 20% of your coworkers getting laid off, yourself possibly included.

You want to pack that umbrella BEFORE it starts raining. Because if you play it right, the blue skies will only be that much sweeter.