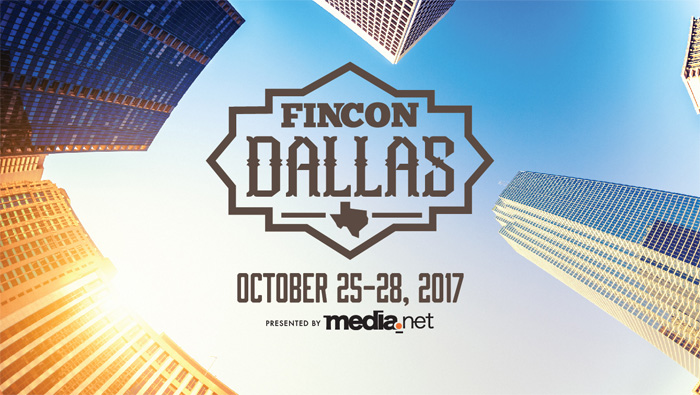 If you’re not a blogger yourself, and you don’t follow the latest happenings from the tech side of the internet, you may be as surprised to learn about FinCon’s existence as my Uber driver was.

“FinCon is a huge conference for money bloggers,” I explained to my Uber driver, who looked at me like I had three heads.

He was probably wondering why anyone would ever pay to attend a blogger’s conference. And he was definitely wondering why not just one person would pay the cost, but also the roughly 1,700 attendees he saw walking around with FinCon name badges.

As it turns out, every year a ton of money geeks descend upon an unsuspecting conference center and get to nerding out en masse. Bloggers, vloggers, authors, tech start-ups, and sponsors all join the fun. The idea, apparently, is to network and learn about blogging and making money.

Fellow bloggers always told me I just had to go, and I always looked at them with one eyebrow raised as high as my Uber driver’s.

I’ve talked before how I’m a natural contrarian. If you tell me the sky is blue, I’ll look for tornadoes turning it green. Plus, I’m ridiculously cheap frugal.

So when I first started blogging 1.5 years ago, and I saw tons of “frugal” bloggers happily dropping hundreds of dollars on conference tickets + airfare and hotel costs, I said no way.

But then a year later, when it was announced that Dallas, TX scored the honors of hosting this year’s hordes of money geeks, I lost a pretty big excuse. A native Texan, I could easily crash with my friends and family for free. And even if the conference was a total bust, it would make for a great reason to visit home.

And to be honest, I suddenly felt a sense of responsibility to the site. A year in, the blog had grown faster than I ever imagined. Traffic was booming, the subscriber list was well into the thousands, and I kept getting more and more appreciative emails from all the awesome readers.

So reluctantly, I booked my ticket. I’ll admit, I definitely double checked that 1) blogs count as businesses, and 2) I could deduct the costs as a “business expenses” to help ease the buyer’s remorse.

I’ll try to keep this part short, since I’m sure the details of a bunch of personal finance bloggers hanging out isn’t exactly your idea of thrilling reading.

Thankfully, FinCon wasn’t a waste of money. In fact, it was a total blast.

I learned a ton about the technical sides of running a website that I’ve been putting off for far too long. I learned even more about strategies for growing our community. And best of all, I met some of my favorite finance bloggers in person.

I said hi to J-Money, the legendary blogger behind BudgetsAreSexy.com. He’s also the guy who generously sends this site tons of traffic from all the Rockstar Finance Features I’ve been lucky to score.

I listened to an awesome speech from Paula Pant, one of my all-time favorite writers, and a huge inspiration for this blog. Her ideas for creating awesome content will hopefully help me write up even better posts for you all.

I said thanks to Millennial Money Man for taking a risk with my first ever guest post, which in a round-about way led me to the front page of Yahoo.com.

And I spent some great times kicking it with:

…who are all just as cool in person as their blogs would lead you to believe. (Phew! how’s that for some shout outs??)

And in between all those shenanigans, I walked away with some very important lessons.

1. There’s a TON of work that goes into blogging

I used to roll my eyes at “full time bloggers.” Now that I’ve seen firsthand how much work goes into running a successful blog, I’m extremely jealous of those bloggers who’ve already reached financial freedom, and aren’t rocking a day-job anymore.

2. Just Taking Action is Half The Battle

For anything in life, I’m learning that taking action just might be the most important step. As an analytical personality type, this is something I struggle with constantly.

Not surprisingly, there’s no super-secret key to success held by some sort of blog illuminati. All the information is already out there. It’s our job to find it and have the courage to take action. (The same advice holds for investing, just FYI, along with just about any other goal in life.)

3. I want to talk to YOU more often

Typing up blog post after blog post had a certain way of burying a blogger deep in the trenches. As I took a week off from writing and took a zoomed out view of my site, I found myself wishing I could chat directly with my readers.

I want to hear hear from YOU more often. If you’re already a subscriber, don’t be surprised if you get a random email from me asking to chat.

I’d love to hear more about your situation, your challenges, and your successes. After all, you’re the reason I started this site, and I think more one-on-one interaction will help me create some laser focused content that you’re sure to dig.

I never really got into blogging for the money. As such, I’ve done a pretty crappy job monetizing this site, despite sporting traffic levels that would make 90% of FinCon attendees jealous.

Even worse, I always held a pretty cynical view of those bloggers who had done a good job making their sites profitable. I assumed they must have sold out, or they were somehow taking advantage of people.

What I learned from talking with some of the internet’s most successful bloggers was entirely different. You don’t have to be sleaze-ball to make money off your site. What a relief!

Better yet, everyone can grow together! If I recommend a product that I truly love (Personal Capital, anyone?) and it helps a reader improve their financial future and also earns the site a little bit of money, isn’t that a win-win?

Even better, there’s no rule that says profits from the site have to be blown on selfish consumer garbage. Instead, that money can be used to keep growing the site and continue spreading its message.

I could outsource the boring, managerial work of this site (traffic analysis, search engine optimization, promotion, etc… BLAH! Shoot me now!) and give myself more time to create awesome content for you all.

If you’ll let me really start dreaming, maybe I could one day use the site’s profits to make a huge impact on charitable causes, or even campaign for financial literacy in schools.

At the end of the day, it’s all working towards what this site has always been about: using myself as an example to bring early financial freedom into the mainstream.

How MyMoneyWizard.com Will Change After FinCon

You won’t see any “sponsored posts” from casinos or life insurance companies, no matter how many emails I keep getting each week. You won’t be bombarded with a million ads per page. And you won’t see me recommending actively managed mutual funds, no matter how generous their affiliate programs are.

Instead, this site will continue to be my creative outlet’s passion project. I’ll continue writing about whatever I feel like, with the unfiltered opinions that only a semi-anonymous blogger can provide.

But, you may see some minor tweaks here and there. I may experiment a bit with ad placement, promotion on social media, and some minor redesigns. If you have a strong opinion about any of this, I’d love to hear your feedback!

As always, I’ll keep any profits from this site in a separate “business account.” I won’t be counting anything earned from the blog in my net worth updates, savings rates, or monthly budgets.

Instead, I’ll work away to slowly reinvest any earnings into the site itself, because I want our message to continue to grow.