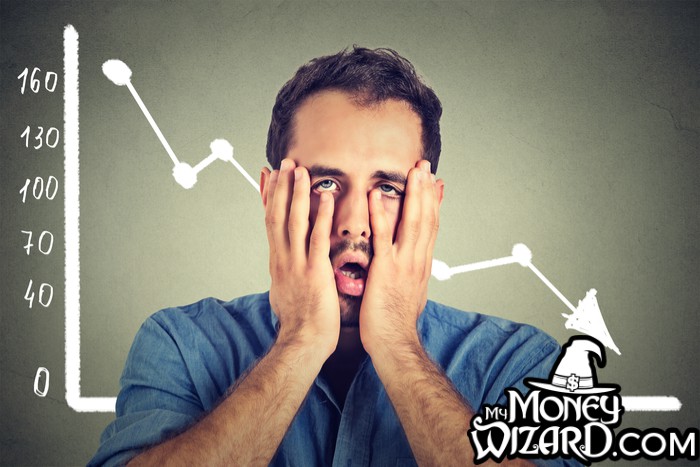 When I look back on my investing career so far, I’ve done a lot of things right.

But I’m also human, which means I’ve made my fair share of bone-headed decisions.

Instead of being one of those money bloggers always humble bragging, I thought it’d be healthy to call myself out.

So get your tomatoes ready! Because I’m putting myself in the hot seat!

If my money mistakes can save even one reader from a similar fate, then putting myself out there will be worth it.

1. I regret all that damn Call of Duty!

Back when I was in college, the roommates and I got absolutely, completely, 100% ADDICTED to Call of Duty: Modern Warfare.

Looking back, it was just embarrassing. We spent days, weeks, and MONTHS playing that game.

As payment for this massive effort, what’d we get?

An imaginary #300 ranking in the world out of the game’s 3 million players. Fun for bragging rights (it’s still kinda cool to say we were in the top 1% of the 1%) but absolutely zero financial reward.

It’s funny. This isn’t even technically a “money mistake” but I’m reminded of Charlie Munger, when asked about his worst mistakes as an investor.

“The mistakes that have been most extreme in Berkshire’s history, are mistakes of omission. They don’t show up in our figures; they show up in opportunity cost.”

Like Buffet, most of my money mistakes were mistakes of omission. (Unfortunately, that’s about all Buffett and I share as far as our investing track records go.)

Call of Duty perfectly summarizes one such mistake.

My gaming binge lasted a significant portion of my college lifetime, which just so happened to coincide with The Great Recession.

At the least, I should have used some of that college down-time to find freelance jobs, make thousands with a side hustle or two, or even start a blog sooner.

I shouldn’t have been “sucking my thumb” (as Buffett calls it) when stock prices were slashed during this time.

I should have put away that damn Call of Duty video game, taken out a second job, and poured every single dollar I could find into the discounted market.

Instead of having lots of badges in a pretend video game, I’d have real income streams. And I’d be tens of thousands, maybe even hundreds of thousands, of dollars richer.

2. I should have maxed out my Roth IRA when I was younger

Another “mistake of omission.”

I didn’t first max out my Roth IRA until my first salaried job – around age 23.

Looking back, it kills me to think about all the lost efficiency there.

Even as a teenager, I could have used my minimum-wage earnings to max out my Roth IRA. Since I was earning so little back then, this would have dropped my income into the 0% tax bracket. If, for one reason or another, I ended up needing that Roth IRA money, I could have just hacked the Roth.

The efficiency of this would have been beautiful. $0 of taxes paid on the front end, $0 paid on withdrawal. Doesn’t get any better than that!

Instead, I paid thousands of dollars worth of taxes on my measly earnings. For no reason!

3. I wish I never would have bought individual stocks

When I was a teenager – I bought my first stocks. That’s good.

Like most teenagers, I was over-zealous and thought I was smarter than everyone. That’s bad.

The result was that I packed my portfolio with a whole bunch of stocks I knew were going to take off and make me rich. They didn’t.

What’s worse, I’m now kind of stuck with these silly stock choices. If I sell, I’ll have to pay capital gains taxes, so it makes more sense to just let it ride. As a constant punishment, every time I check my portfolio’s holdings, I’m reminded of my younger mistakes.

Not only would dealing with my finances be so much easier, but I’d be several thousand dollars richer, too!

4. I didn’t take advantage of the saver’s credit when I had the chance.

So there’s this little known finance trick called “The Saver’s Credit.” I talk about it in this post.

Essentially, it’s direct savings on your taxes if you contribute enough money to your retirement accounts and you’re a “low wage earner.”

The IRS definition of “low wage earner” is pretty generous, since I qualified as one while working in finance my first two years after graduation. But I had no idea the credit even existed, even though I was making all the right moves.

It’s worth it to have an expert file your taxes.

A lot of other personal finance bloggers disagree with me on this. They’ll say taxes are easy, and you should just D-I-Y it.

I disagree. Taxes are crazy complicated. And if your accountant finds one benefit like the savers credit for you, they’ve paid for their fee 20 times over.

These days, I always spend the extra $50-100 and have a CPA do my taxes. It saves me time too, which makes the deal even sweeter.

5. I should have been more aggressive in my travel hacking

I’m probably being too hard on myself here, because I first got into travel hacking when it was just a bunch of weirdos on online forums with too much time on their hands.

And over the next few years, I built up enough miles and points that I’ve barely paid for a flight in years. And I still have tons of freebies left over!

Nonetheless, 3-4 years ago, I dialed back my credit card sign ups. Why? I kept playing the perpetual game of, “Well, I might buy a house soon, and I want to keep my application history clean.”

(Applying for a credit card results in a temporary 5-10 point decrease in your credit score. The drop goes away entirely after 12-18 months, but you want to be careful you’re not applying for any loans in that time.)

Of course, I never bought that house/rental property, and in that time, I could have racked up another 6-7 credits cards with $500 to $1,000 of rewards points each.

Travel hacking definitely isn’t for everyone, but it can be insanely profitable if you play the game right.

If you want to get in on the action, there’s always great signup bonuses to be had. One of the many good deals I’ve seen recently is a free $1,000 worth of travel from the Chase Business Ink, so I’m shamelessly dropping my affiliate link here. (Not a business owner? You still probably qualify. Their definitions for business owner include everything from scooter charger to furniture flipper.)

I’m sure we can continue talking about all my mistakes for days, but we’ll stop here because those tomatoes are getting out of control!

Do you have any money mistakes you regret? We’re all human, so don’t be afraid to share!