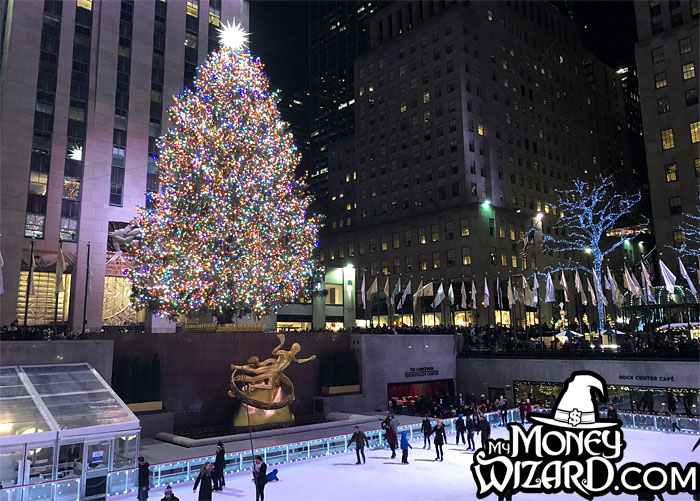 If you’re new here, I’m working and saving towards a roughly $1 million portfolio by age 37. So far, I’m 28 years old, with a new worth of… well you’ll have to read on to find out!

December seems to always be a busy time of year for everybody, me included.

I started the month in a pure panic about getting everybody’s Christmas gifts in order. I had a lot to do, both work-related and personal-related, before Lady Money Wizard and I left town for a few days in search of even more holiday cheer.

You see, Christmas in New York had always been on both of our bucket lists. And when an impulse buy accidentally left us with two tickets to the new Harry Potter play on Broadway, with the dates preset for mid-December, we decided to pull the trigger. (Harry Potter nerds, represent!)

So, one week into the month, we left Minnesota and flew to New York City. I’d visited The Big Apple once before as a teenager, when I spent two quick-paced days in the city, which both flew by faster than a New York minute. (Ba-dum-tss!) This go-round, we had five full days to work with, and I was excited to take in the city through the eyes of something resembling a fully functioning adult.

And five days we spent, although I can’t say they went by any slower. New York City is a frantic madhouse in the best way.

Over the course of our five day trip, we walked Central Park, visited holiday markets, ate delicious food, saw the Christmas light displays, ate more delicious food, haggled in Chinatown, ate even more delicious food, toured the 9/11 Memorial, explored Brooklyn, ordered a-few-too-many-drinks from more bars than any city should ever have, and finally saw the Broadway play that brought us in here in the first place. (Which was amazing, even for a total play-noobie like yours truly.)

Oh and of course, I wouldn’t be a good money blogger if I didn’t snap a pic of the New York Stock Exchange!

Overall though, New York is not my favorite place in the world. Most of the tourist attractions were so absolutely packed with people they weren’t all that enjoyable, and I found the highlights of the trip to be the rare escapes from the main attractions, like this empty park in Brooklyn where we enjoyed a skyline sunset.

I definitely left New York with an answer to a question I’ve long wondered. When it comes to vacations, there’s big city people and then there’s nature people. And maybe it’s because I live in a big city during the rest of the year, but I can now definitively say that my ideal trip is nature oriented, mixed with a small town or two.

Coincidentally, those nature vacations are also a whole lot cheaper than their big city counterparts, but we’ll get to the financial damage in a little bit.

After returning from New York, I was thrust back into mountains of work. Eventually, I spent Christmas with Lady Money Wizard’s family before heading down to Texas to visit my family for the end of December and into the New Year.

A noticeable dropoff to end December, plus a $5,000 or so uptick due solely to this update not being written until a few days through January.

Ouch. December was a brutal month in the market. The S&P 500 fell nearly 10% in one month, which is pretty nuts. The decline was enough to push the overall stock market into negative territory for the year, for the first time since 2008. Check out this graph of the S&P 500 from January 1 to December 31, 2018.

Overall, the stock market closed down roughly 6% for the 2018 year.

And obviously, my portfolio, which is concentrated almost entirely in stocks, took a beating on the month too, wiping out $14,000 of net worth in 31 days. (Technically, 35 days, since I’m writing this after the market’s Friday closing bell, heading into the first weekend of January.)

What do I think of all this? Well, it kinda comes with the territory, if we’re being honest. The market has returned 7% per year on average, since the early 1900s. But nobody’s saying that 7% percent has been a smooth ride. There’s been months, and even years, when the market is down double digits like it’s nothing.

For young people still in the accumulation stage, what separates the true wealth builders from the posers is an ability to ride out the waves, keep investing while everyone else is panicking, and coming out the other side even richer.

To repeat a broken record from the past few months, my cash position has been steadily climbing ever since I decided to save up for the down payment on a rental property.

The unintended benefit is that I accidentally find myself in a good position if the market continues to decline. We’re not anywhere near true recession prices, like the 2008 days, but if prices fall another 20-30%, I’ll be tempted to abandoned my rental property plans and just pour cash into the market instead. Trying to “time the bottom” is not what I’m going for, but we’ll see.

A rough 7% drop in my brokerage account, which mirrors the nearly double digit drop in the overall market. My target brokerage breakdown remains:

But with the big declines, it’s possible this position is out of whack. On the to-do list for next month, reevaluate my holdings and see if my current breakdown matches my target, and adjust accordingly.

The only reason this decline didn’t match my brokerage decline is thanks to $1,000 of automatic contributions and employer matching during the month. My 401k target remains:

I still haven’t contributed to my Roth IRA in 2018, and this is just getting embarrassing.

You have until April 2019 to make 2018 Roth contributions, and I have no idea what’s holding me back. Procrastination mostly, I’d guess. I need to just pull the trigger, especially when I’ve got over $20K just sitting in my cash account.

It’s sort of interesting, and mostly disappointing, to see that the diversification benefits of this account aren’t really holding up. My Roth IRA is invested entirely in Vanguard’s REIT index fund, which tracks the real estate market, which hypothetically should act somewhat counter to the overall stock market.

Obviously, that wasn’t the case in December 2018, but it’s hard to analyze things in a one month vacuum.

A rare $0, just because I’m writing this post in the first few days of January, so I’ve already paid up my $823 December obligation.

A whopper of a credit card bill, but that doesn’t tell the whole story. During the first days of the New Year, I put down a $1,500 deposit for a ski trip with friends, which I’ll get reimbursed within the next two months. I’ve also got a small amount of reimbursable work expenses on here, so let’s check out the true December spending report: 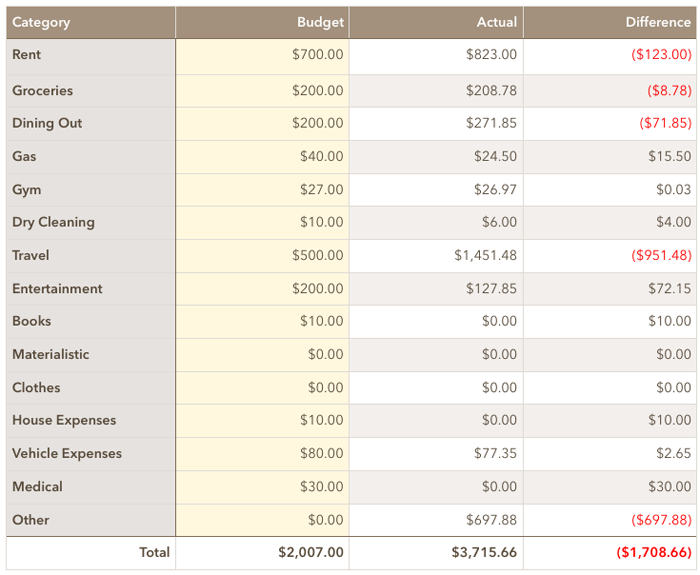 Pretty standard stuff here. Stay on the lookout for a detailed post about my grocery spending this month.

Definitely a little over budget here. Between the travel and laziness, I defaulted to dinners out a little more than usual, including a $75 sushi splurge.

Protip: If you want to have a frugal vacation, DO NOT go to New York City.

Overall, I’d say we did it about as cheap as possible, staying at a cheap hostel and not going too nuts with the entertainment.

That said, a trip or two to the bars, complete with seventeen dollar cocktails, plus your average entree at a sit-down place running $35+, and this vacation added up quickly.

Quite the contrast to October’s $300-all-in trip to Zion National Park, which ironically, I found to be a better overall vacation anyway. Guess you don’t always get what you pay for, at least when it comes to vacations.

This bill also included a $250+ roundtrip flight to visit family in Texas over the holidays.

Second culprit found. Included in this category was $70 of pet medications and $600+ of Christmas gifts and donations for friends, family, and charities.

Strangely, or maybe not so strangely, I feel the least guilty about this category. Monetarily, I had a pretty fantastic year in 2018, so it felt good to give something back.

How was your December?

For most people, December is typically the spendiest month of the year. Hopefully, you didn’t throw caution to the wind quite like I did, although speaking from experience, I can’t say I’d blame you too much if you did.

Happy New Year, everyone! See you in a few days!