What would you do with $90 billion dollars?

(PS – Yes, it’s entirely possible that I’m writing this post just to avoid checking the damage to my personal capital account after last month’s historical crash. Instead, I’m just gonna close my eyes and pretend I’m one of the world’s richest dudes. 😎)

What is ‘Spend Bill Gates Money’?

So apparently, there’s this guy Neal (better known as Neal Fun from his clever url, https://Neal.Fun) who decided to put Bill Gates’ staggering wealth into perspective.

He built a game (it’s really just a website) that lets you pretend to be Bill Gates for a minute. The rules of “Spend Bill Gates Money” are pretty simple. You’ve got Bill’s $90 billion fortune, and you can buy absolutely ridiculous stuff with it. Think Rolexes, cruise ships, sports teams, etc.

Apparently, the game went viral on TikTok, which led someone to send it my way.

Think you’re up for the spend money game?

I thought so, too. Here’s how it went… 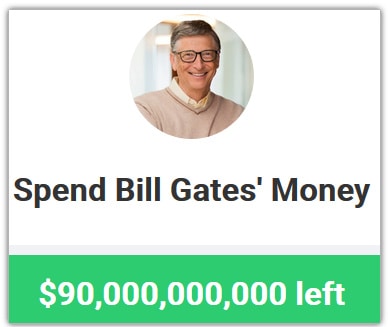 How I spent Bill’s fortune:

Well guys, I’m not a very good billionaire, because I failed to spend my last few billions.

Maybe you can do better?

How much money does Bill Gates have?

The funniest part about this game is that it actually underestimates Bill’s fortune.

Of course, like all billionaires, most of Bill’s net worth is tied to stocks, real estate, art collections, etc. So spending his money in real life would be much more difficult (if not impossible) than just writing checks for fighter jets.

How does Bill Gates spend his money in real life?

Apparently, shortly after becoming the richest man in the world, Bill Gates played this game himself.

And it seems he came to a similar conclusion as me.

In October 2019, Gates gave a speech where he posed the question of what to do with his riches:

Where can you put your Money?

You can try to spend it on yourself.

How many hamburgers can you eat?”

He thought about leaving his fortune for his kids, but according to other interviews, he eventually decided to take the Warren Buffett approach. (Buffett famously believes you should leave your kids, “enough money so that they would feel they could do anything, but not so much that they could do nothing.”)

Eventually, process of elimination brought Bill Gates to spending his fortune on philanthropy.

Since starting the Bill & Melinda Gates foundation in 2000, Bill has personally donated $36 billion to the charity.

That means Bill Gates has officially given more money to charity than any human. Ever. And with the help of his contributions, his charity has raised a total of $47 billion, which also makes it the most charitable organization ever. (Good call, Bill, that’s definitely a better use for that money than my idea of buying the entire NBA…)

That said, Bill’s no pauper.

He owns a 66,000 square foot high-tech mansion near Seattle that’s worth $127 million. And some of the stories about it are wild…

He reportedly pays over a million dollars a year in property tax on the house alone. Plus, in addition to the house, Gates owns a massive real estate portfolio, including:

Car and real estate collections aside, Bill’s still keeping the philanthropy strong. In March 2020, he surprised the world when he announced that he’d be retiring from the boards of Microsoft and Berkshire Hathaway in order to “dedicate more time to philanthropic priorities including global health and development, education, and my increasing engagement in tackling climate change.”

In the mean time, I’ll be pretending to use your money to collect imaginary F-16 fighter jets and entire sports leagues.