There I was, minding my own business yesterday when I got a notification. Something about a historic selloff.

I checked Yahoo Finance, and saw this:

A headline that will surely grab your attention. ESPECIALLY if you happen to have hundreds of thousands of dollars invested in the market.

As much as I believe in ignoring most of the market noise, I’m not sure I’d be able to call myself a proper personal finance blogger if I didn’t at least put some sort of effort into analyzing what the heck just happened.

So, here’s my 5 quick thoughts on all this noise.

Anytime crazy things start happening in the world, whether its the financial world or otherwise, it’s worth reminding yourself that the media is mostly in the business of grabbing eyeballs.

And that’s what many news outlets are doing here, in a way.

Personally, I think the old timers who spent the latter half of their roaring 1920s standing in line at soup kitchens because 20% of the population was completely, utterly, out of a job, might have something to say about these last 6 days being the “worst” stock market crash ever.

But facts are facts. And over the past week, the stock market dropped by 10% faster than it’s ever fallen by 10% in the history of… ever. 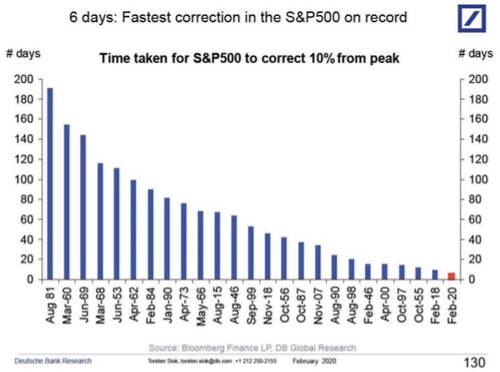 2. The underlying cause? ‘Ze Coronavirus.

(Why the beer company hasn’t capitalized on this with a clever marketing campaign yet, I’ll never know.)

It goes like this. The stock market is a complex bidding process, where buyers and sellers get matched up based mostly on the two opposing side’s opinions about the future.

Now, if everyone was like me and you, wisely investing our money for the 30+ year timeframe, the market would mostly keep a steady upward march.

But most of the money in the market isn’t like me and you. In fact, us piddly retirement savers are dwarfed by the ultra high net worth individuals, the business analysts looking for economic clues buried deep in company financial statements, and the day traders looking to make a quick buck on recent momentum.

And with the recent news about this Coronavirus spreading to California (they’re currently monitoring about 8,000 potential cases there) those analysts, day traders, and even some ultra high net worth investors are concerned.

The general sentiment is that all the fear about travel to China will be a big anchor dragging down the productivity of so many businesses reliant on the area. And if a true pandemic hits, and millions of people have to be quarantined, well… it’s gonna be hard for many businesses to continue their steady growth if half their customers are cooped up inside, and half their employees are working remotely.

Why? Because they tend to spread via compounding.

And if compound interest is powerful enough to allow regular folks to become multimillionaires through saving essentially pennies a day, it seems like compounding could have equally unfathomable results when it comes to health and populations.

And I’m not the only one who’s a little concerned about this. In fact, I’ve been following this whole thing unplay on twitter for the last few months, (psst… follow MyMoneyWizard on Twitter if you don’t already!) and the people initially sounding the alarm on it were people whole a lot smarter than me. When folks like the brilliant multi-billionaire tech investor Naval Ravikant start getting seriously concerned, I pay attention.

If a 1% difference in investment fees can cause millions of dollars of change to future portfolio values, a 300 times higher death rate on an exponentially spreading virus sounds like a pretty big deal to me.

4. Governments seem to be downplaying this.

In China, it was like a modern day Chernobyl over there.

The communist government first denied there was any virus at all, but after thousands of clear infections, a local doctor blew the whistle on the cover up. He was quickly summoned to China’s Public Security Bureau and forced to sign a letter about making false comments.

A few days later, that 34 year-old doctor began showing symptoms and died of coronavirus, leading to massive public outrage. The Chinese government responded by claiming the doctor was still alive. When news agencies proved his death, the government decided to shut down the internet.

Sounds crazy, but even in the US, following 8,000 potential cases being monitored in California, the White House instructed leading health experts to avoid talking to the press.

“Dr. Anthony S. Fauci, one of the country’s leading experts on viruses and the director of the National Institute of Allergy and Infections Diseases, told associates that the White House had instructed him not to say anything else without clearance.”#covid19 https://t.co/J8k8L4CWzC

Historically, the stock market has done slightly better than average during election years, as the defending president presumably pulls every string he can to prop up the economy heading into the voting season.

I’d say censoring the country’s leading health experts could be an example of that. As would recent rumors that the Fed may cut interest rates in March. (Which usually props up the stock market.)

5. As usual, the best move is to stay the course.

Sorry for the anticlimactic ending.

But we’ve had double digit market corrections nearly every year for the past decade. So while the news of a modern day bubonic plague sure is headline worthy, we’re not exactly in uncharted territory.

Investment is won through consistency, not mass hysteria.

Personally, I haven’t even checked my net worth yet. I’m sure it will be down significantly.

The question I have to ask myself as a 20-something with many years ahead of me (if the coronavirus doesn’t get me first!) is this… Do I believe the market will be in a better or worse spot 30 years from now?

Kudos to The New York Times for being a rare news outlet to put things into perspective: 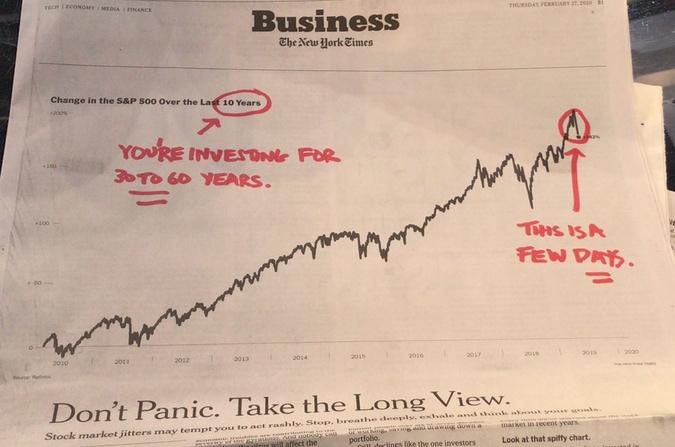 If things continue getting worse from here, well then: