It’s time! Time to see how I did on my progress towards nearly $1 million and an early retirement by age 35. I recently turned 29, so let’s check in on the progress so far!

Looking back, April was a pretty low-key month. No major headlines, no travel.

So, what did I do without the glitz and glamour of any trips?

Well, mostly, I enjoyed the simpler stuff around town.

Lady Money Wizard and I dusted off the bicycles, and we started enjoying the beautiful Spring weather here in the Twin Cities. Me and The Money Pup took a few extra walks, which also coincided nicely with our newfound blue skies.

On one such walk, we spotted our daily dose of “awwww!” when this police puppy was learning the ropes in his little police vest.

I watched him work his way through the field, alternating between seriously sniffing the ground like a good police dog in training, and clumsily pouncing through the grass with an undeniable puppy’s enthusiasm.

Eventually though, he decided he’d had enough of the working lifestyle, and would rather just get bellies:

Elsewhere in the month, Lady Money Wizard and I resorted to a lot more dinner and drink dates. One of those dates was definitely an interesting one – we bought tickets to the World’s Largest Bloody Mary Bar!

I was skeptical of the claim at first. But once I got there, I’d never seen anything like it.

This thing was 100+ feet of vegetables, cheeses, meats, and yes, even hamburgers… all to skewer on top of your meal in a glass.

To say we enjoyed ourselves would be an understatement. Probably not as good for the health as a bit of travel would have been… but at least all the drinks and ubers were still cheaper than airfare and hotel rooms!

All that said, there was one kind-of-glamorous splurge to the month. At the beginning of April, March Madness college basketball was coming to a close, and to the shock of the world, The Money Wizard’s Alma-Mater (Texas Tech) somehow made it to the College Basketball National Championship!

AND… that championship, by pure dumb luck, was being held in Minneapolis!

At this point, I knew my hands were tied. Within a few minutes of learning about Texas Tech’s surprise moment in the national spotlight, I had my $150 nosebleed seats in hand. 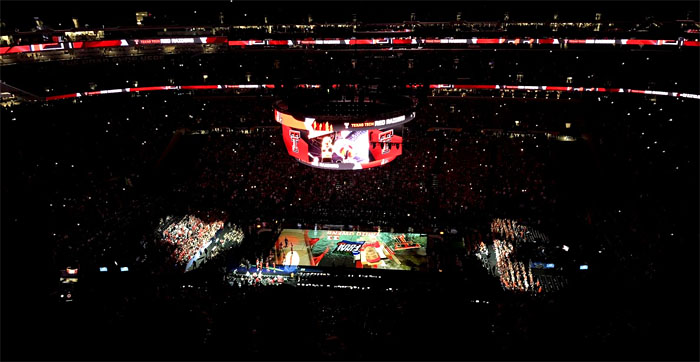 I’ve gotta say, it was pretty surreal to walk into the former home of the NFL Superbowl, over one thousand miles away from my college town, and see my school’s colors projected on the jumbotron.

Ultimately, they lost, which was a real bummer. But it was still a great time. Seeing your team play for the national championship… in person… in your city… could be a once in a lifetime experience. I’m proud of the showing either way.

A cool little milestone. Let’s just hope it holds up.

Earlier this year, when I looked at the best ways to invest your cash in 2019, I decided that money market accounts were the way to go. I also decided that since Vanguard charges zero fees for purchasing and selling their funds, that it makes perfect sense to funnel all my extra cash into Vanguard’s money market index funds. (At least temporarily.)

So you can probably imagine my surprise when I blinked, realized the end of April was approaching, and then realized I still had not once made good on my strategy.

So, towards the end of the month, I moved $14,000 from my checking account to Vanguard’s Federal Money Market Index Fund. With a current interest rate of 2.3%, I should make an extra $330 per year from this move alone, at least when compared to letting that cash sit in a checking account.

Not nearly as good as the stock market, but not bad while I build up a potential rental property downpayment or otherwise consider my next move.

After the cash contribution, my brokerage allocation now sits at:

Still might not be my perfect allocation, but I like to say – imperfect investing is better than no investing.

$1,000 of automatic contributions including employer matching, plus $3K of market fluctuations.

I still need to do some balancing to get this exposure more in line with my desired allocation.

A little bit of shuffling here. You might remember that I maxed out my Roth IRA earlier this year. At the time, I put all $6,000 into Vanguard’s federal money market index, then planned on converting $1,000 a month to Vanguard’s REIT index.

Last month, I forgot to do that conversion. So this month, I converted $2,000 from VMFXX to VGSLX.

The first housing payment below $800 since the start of winter! A good sign for the local weather.

Always an inaccurate total due to the timing of billing cycles and the presence of reimbursable work expenses. As usual, let’s look at the spending report for better info: 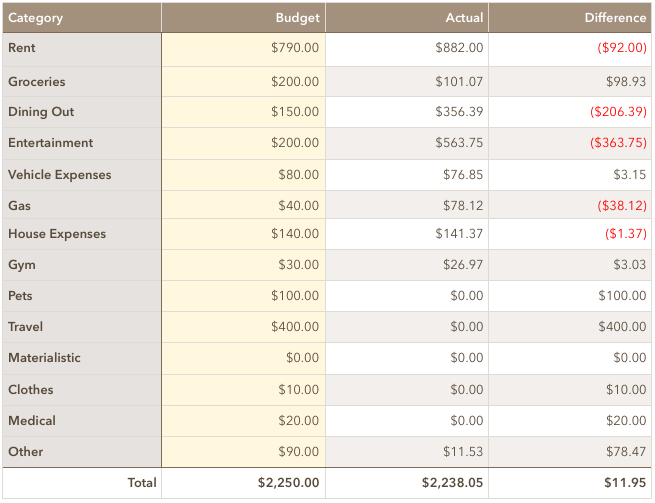 Dug into the freezer leftovers quite a bit this month, which helped keep costs down.

There’s also a darker factor contributing to this low total, and it’s this next category:

Yikes! We definitely dined out quite a bit this month, so I’m actually not surprised. Which is kind of embarrassing to say when looking at a $350 bill…

The even bigger one this month. Major items here included $50 to watch the Final Four game at a local sports bar, $300 for two National Championship tickets, $60 for tickets to the World’s Largest Bloody Mary Bar, and nearly $100 in cocktail bar/brewery trips! 😬

Of which, about $130 from my most controversial expense – a maid.

How was your April?

I hope you’re meeting your goals! Don’t give up on those 2019 resolutions just yet!