Hey Money Wizards, welcome to the end of summer net worth update.

If you’re new here, every month I share all my progress towards a nearly $1 million portfolio and an early retirement by age 37. Since money tends to be a pretty taboo subject IRL, I hope that by sharing all my details here, you just might find something helpful towards your own situation.

Where to start with August?

Well, after months and months of broken record updates, the kitchen remodel is finally finished. Sure, it’s a few months behind schedule, but I’ve watched enough House Hunters Renovations to know that’s just par for the course.

I’ve also watched enough House Hunter Renovations to know that so is blowing the budget. Which we did in glorious fashion.

Our original napkin math budgeted $10,000 for the renovation. Looking back, that might have been a little ambitious given that we planned on blowing out a load bearing wall and replacing ALL the appliances, flooring, cabinets, and counter-tops.

Thankfully, we also mentally prepared ourselves for 50% overages, because hey, that’s what happens when you’re dealing with house stuff. That turned out to be a wise move, because the total bill came just over $14,000. Ouch!

I felt a little down about that, right until I considered how much work was actually done, and how much money we actually saved. It turns out, similar renovations run the money muggles over $30,000. But through a mix of research, coupons, and deal hunting, we saved $1,900 in quantifiable discounts and rebates, thousands more on our product choices, and untolds more on labor.

How, you ask? Well, I’m devoting a whole post to that next week!

Now’s also the part where I’d plaster some glorious before/after pics of the renovation, but that will have to wait for next week’s post too. 😉 How’s that for some suspense?

In other news, I also attended Minnesota’s annual August tradition – The State Fair! 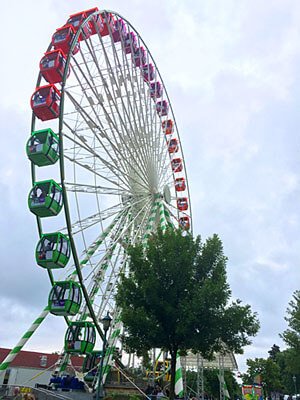 The Minnesota State Fair is an extravaganza like nothing else, complete with food, drinks, rides, and of course… the state’s fattest pig.

Speaking of food, the fair was truly a blur of a binge fest. I went with a group of friends, and our game plan was strength in numbers. With so many in our group, we thought for sure we’d be able to divide and conquer all the decadently disgusting yet delicious snacks at the fair.

Before I knew it, we were passing around guilty pleasures like druggies on a bender. Corn dogs, french fries, cookies, giant pretzels, pizza slices, popcorn, waffles, cookies, and honey drizzled ice cream all bombarded my poor, unsuspecting stomach in a matter of hours.

The most frugal trip to the fair? Definitely not. An absolute blast? Definitely! I’ve certainly blown $60 in worse ways.

Speaking of blowing money, I dropped nearly $200 on my first “materialistic” purchase in a while.

Tired of constantly brushing The Money Pup and The Cash Cat’s hair off my feet whenever I walked around the house, I said enough is enough. My futile attempts at sweeping were no match for the dense fur coats of the animals. So, I caved, and I bought myself one of the fancy-pants robot vacuums.

I did pick one of the cheapest ones possible (the Eufy 11s) but that didn’t mean I was any less worried about the dreaded buyer’s remorse.

What’s interesting, is a few weeks later, I found myself just as excited about the gadget as day one. Which is interesting, especially since hedonic adaptation says we usually get adjusted to our purchases.

But then, I did some more reading. It turns out, there’s significant research that shows more happiness usually comes not from adding super-cool things to our lives, but instead removing those things we hate.

Which sort of explains my fascination with this robot vacuum thing. At first glance, I added a gadget. But in reality, I actually removed a chore I hated doing. And because of that subtle difference, science claims I’m slightly less likely to experience buyer’s remorse. Something interesting to consider the next time you’re sweating bullets over a spending decision.

Now, after that lengthy introduction of all the ways I wasn’t frugal this month, what’s my net worth looking like?

I’ve been pleasantly surprised with how quickly this balance is growing ever since I adjusted down my 401(k) contributions from over 25% to 7%. I talk about my reasoning for doing so here, and I’m hoping it will allow me to diversify into real estate a little quicker.

That said, the cash balance won’t stay this high for long, due to an unusually large credit card bill I’ll pay off soon.

Just a bananas crazy month for the stock market. The S&P 500 was up 3% during August, which is especially nuts when you consider that’s about 1/3 of the average year’s expected returns. In one month! (Typically, the market returns 9-10% a year, with inflation usually bumping down the “real” returns by 2-3%)

I’m not sure how much longer this rise can last. Then again, I’ve been asking the same question for the past 6 years. Which is just more proof why it’s silly to try to time the market. Instead, like Dory from Finding Nemo, the wise investor has to just keep investing.

That said, I didn’t make any contributions to the after tax brokerage, because I’m saving up for a rental property. My breakdown remains:

The $1,000 of contributions represents my 7% contribution mixed with the employer’s matching.

Last month, a few readers asked what my 401(k) was invested in. Ask and you shall receive!

Like all my investments these days, I choose to go with the lowest cost index funds available. The breakdown of those index funds are:

The higher percentage of small cap and international exposure tilts my 401k towards a little more aggressive allocation. I’m comfortable with this since I may not touch these investments for a while.

Hey, passed $25K! The Roth is invested entirely in VGSLX (another one from the list of 6 legit index funds).

It’s hard to believe it’s already September as I write this, which means I need to get onto maxing out my $5,500 of allowed Roth contributions this year.

My half of the mortgage, utilities, and anticipated home maintenance. (We allot 2% of the home’s value to expected maintenance each year, or $300 per month. This lets us pay for any miscellaneous house expense’s stress free.)

This unusually high bill includes some of the typical work expenses, which will be reimbursed. More notably, it includes half the rental cost of a MASSIVE ski condo for me and 8 of my skiing buddies, who are heading to Big Sky, Montana this winter.

Because I’ll eventually get reimbursed for this $1,600 bomb, I’m not including it in this month’s spending report. Although it does explain the entire $1,500 increase in credit cards payable from last month.

Unusually low, but mostly just a quirk of timing. I took a huge grocery store trip on the last day of July, which carried me over for most of the beginning of August.

The previously mentioned state fair madness, a beer fest, a minor league baseball game, a few brewery trips, and a round or two of mini golf for good measure.

Paint is expensive! I bought a couple gallons in anticipation of repainting some interior rooms.

The vet is expensive too! The Money Pup had to make a trip, because his seasonal allergies were getting the best of him.

The good news? His symptoms are cured! The bad news? A new $60 per month prescription.

Pretty crazy that despite a pricey robo-vacuum purchase, event tickets to a beerfest, wild spending at the State Fair, and a several hundred dollar vet visit, I still came in right around budget. (And somehow, far below the average American’s monthly spending.) Just goes to show the power of taming The Big 3.

BTW – if you’re looking to start tracking your own net worth, I still think Personal Capital is the way to go.

Readers, how was your August??