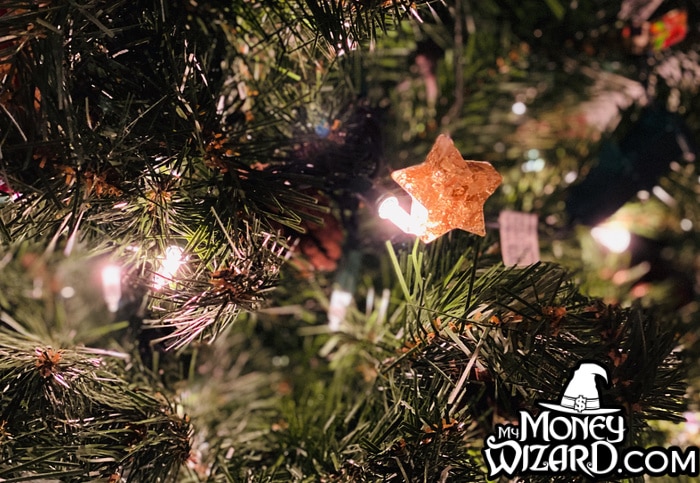 Every month, I track and share my progress towards growing my investments towards roughly $1 million.

The end goal? Financial freedom by age 35. I’m currently 29 with a few hundred thousand to go, so let’s close out the year and check out the progress.

What’s there to talk about during December, besides the most wonderful time of the year?

The Christmas festivities ramped up on all fronts. We strung up our Christmas lights, and The Money Pup put on his Christmas best to go meet Santa at a local brewery:

Eventually, I flew to Texas for an early Christmas with my family, where I spent an amazing week catching up with relatives before heading back to Minnesota for Christmas with Lady Money Wizard’s family.

For some reason, the sentiment of this holiday season hit especially hard. I spent a lot of time thinking about how lucky I was to be where I was, and I spent even more time making sure to appreciate the good times while they were here.

I feel like the personal finance community in particular can get especially caught up in permanently delaying gratification. Taken to the extreme, it’s easy to fall into the mindset trap that “Once I hit X number of dollars, THEN I’ll be able to really enjoy life.”

I’m as guilty of it as anyone. Heading into the New Year, I’m doing my best to remind myself to appreciate how good I’ve got it.

I wish there was a way to know you’re in the good old days before you’ve actually left them.” -Andy Bernard, The Office

With that out of the way, it is the end of the year! Which means I’ll keep this intro light, and we’ll instead take a bit more time reflecting on what you came here for. You know, those financial details, like portfolio allocations and investment plans, which can actually make us all richer.

(In the coming weeks, I’ll have a whole post or two reviewing my year’s spending, my successes and failures, and my goals for next year. Consider this a teaser!)

Getting out the trusty calculator… checking the math… carrying the two… that means my net worth grew a staggering $103,999 in 2019!

As far as I can tell, that’s ridiculous. A six-figure jump, driven by some serious compound interest in a runaway stock market, plus a last minute raise at work, and maybe most importantly, over $40,000 of straight-up savings. (Teaser #2: I’ll have an exact breakdown of my 2019 spending and savings in an upcoming post.)

And since it’s the end of the year, I thought it’d also be smart to check in on the portfolio allocation: 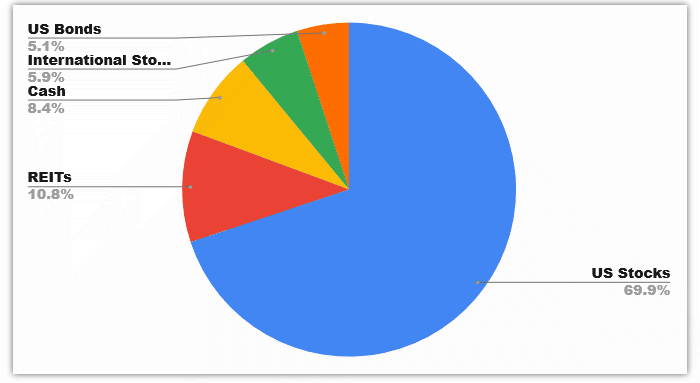 Not perfect, but we’ll get to that.

I’m really happy with where the cash fund is, and it’s time to start making moves.

Stocks ended a high year on a high note, which meant the brokerage account continued to go up, up, and up.

By my calculation, the market returned over 20% in 2019, which is significantly higher than the average stock market return.

In fact, the brokerage account’s growth, which has the highest amount of US stocks compared to all the other parts of my portfolio, actually skewed my portfolio allocation a bit. If you take another look at the pie chart above, you’ll see US stocks at nearly 70% of my portfolio.

It’s hard to talk about my 401k without going through a quick flashback.

For the first few years after starting my career, I maxed out my 401k religiously. But then, once my 401k was set to compound to a couple million dollars, I started wondering whether I should actually dial back those 401k contributions for the first time in years.

So, in late 2018, I reduced my 401k contributions down from $19,000+ per year to just enough to get my employer’s full matching benefit. My idea was to build up a cash pile to eventually invest in rental properties.

And well… an attractive deal on a rental property never came. Which wasn’t all bad. I still got the benefit of increasing my cash, while shifting my portfolio towards a little more conservative position. (Aka… invested in more cash/bonds than before.)

But then at the end of this year, I got thrown another hanging curveball. And there’s only one thing to do with hanging curveballs – knock them out of the park. I’m talking about that six-figure promotion, which brought a new first world problem along with it – having to pay tons of taxes.

I still haven’t set the exact contributions, but my tentative plan is to invest those contributions a little more heavily towards international stocks, which should help address the overweight position of US stocks in my portfolio at the moment.

Long time readers know I have a history of procrastinating on my annual Roth IRA contributions. I’d wait months before ever contributing anything, which meant missing out on mucho compound interest and frequently stressing over lingering chores.

My affliction eventually led me to say enough is enough. And for the first time last year, I plopped down the entire $6,000 of allowable Roth contributions in January 2019.

I was pleased with how that worked out. It’s always nice to cross off a chore early! So, I plan on doing the same thing in January 2020.

Which means that for now, no news to report in the IRA account this month. (Other than $85 a random monthly fluctuations.)

Utilities have been all over the map this year. I got lulled into a super cheap month of heating last month, before getting blindsided by a $300 heating bill this month. Not sure what to say there. I do still need to take up some reader’s suggestions on getting my energy company out for a free audit.

(For newer readers, I share a house owned by my fiance. My rent payment to her includes my half of the mortgage, utilities, and anticipated home maintenance. We allot 2% of the home’s value to expected maintenance each year, or $300 per month.)

A MASSIVE credit card bill this month. At first I thought I got a little carried away with the holiday gift giving this year, but as we’ll see in the next section, December actually came in under budget.

It turns out, towards the end of the December I pre-paid nearly all of my travel through June 2020. And it also turns out, those hotel stays, ski lift tickets, and airline flights actually cost some money! Who knew!?

(Just FYI, I’ll be paying the credit card statement in full at the end of the month. I never carry credit card interest, because that’s just a financial disaster.) 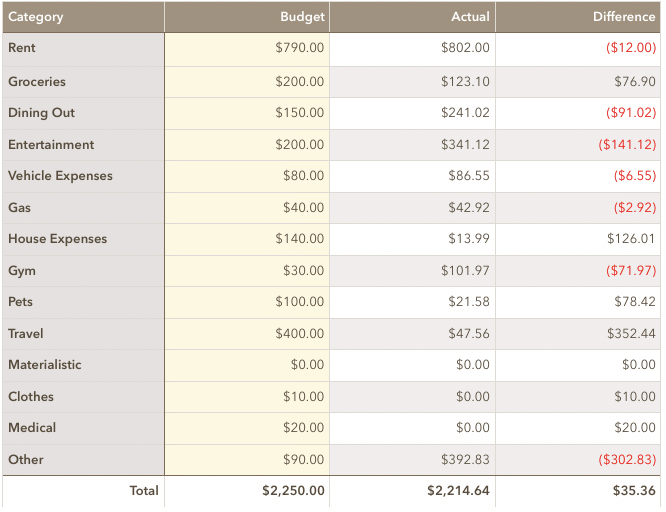 (FYI #2: There’s a big difference between my credit card bill and my total spending amount. That’s because I prefer to break down my monthly spending in the months I actually use those goods. For example, even though I paid $200 towards a hotel stay that I’ll use in February, I won’t count that as spending until the February update. I find that keeps things much more organized for me.)

And now, a quick a summary of the biggest/most interesting monthly expenses:

Of which, nearly half came in the form of a $110 New Year’s Eve fancy-pants tasting menu that Lady Money Wizard and I enjoyed. Between our engagement, my promotion, losing one cat and adopting a new one, and a host of other things, 2019 was a big year for us, and we wanted to reflect on it in a special way.

Mission accomplished – I was a little nervous the meal would be one of those stereotypical overpriced dinners, but it was actually delicious. And a total blast.

In 2020, I may shoot for a quality over quantity approach to our dinners out. Meaning less frequent Chipotle burrito runs, and more frequently applying those savings towards some fancier places we’ve wanted to try for a while. We’ll see.

Highlights here included a bus-tour with friends to gawk at Christmas lights, a Groupon sale on tickets to a local arcade, and a massage to address some crazy soreness after doing my best to get into skiing shape.

Oh, and a big brewery trip, so The Money Pup could get his picture with Santa, of course… (featured at the top of this post!)

Speaking of the gym and getting in shape for ski season, in December I tried out something I’ve long avoided – running.

But after starting, I couldn’t get the thought of a long lost meme out of my head. It read:

What’s the most frequently misused piece of equipment at the gym?

I also know that for many, running is a one-way ticket to banged up knees and other nagging injuries. So I decided to spring for a $75 private lesson with a professional runner. She spent over an hour critiquing my form and setting up a training plan.

Like most health related spending, so far it’s been some of the best money I’ve spent, and I’m really excited where it will take me.

The trip to Dallas was all airline miles and cashing in rewards points at the hotel of Mom and Dad. 🙂

The $48 here is just Ubers and Lyfts.

Turns out I did get a little carried away on the Christmas gift spending, including over $100 to fly down all my favorite Minnesota beers to share with my Texas family. Plus another $100 towards my favorite Christmas tradition – a shopping spree for Toys for Tots.

MyMoneyWizard.com readers are amazing. I hope you all had a fantastic holiday season, and best wishes on your 2020! Here’s to a new decade!