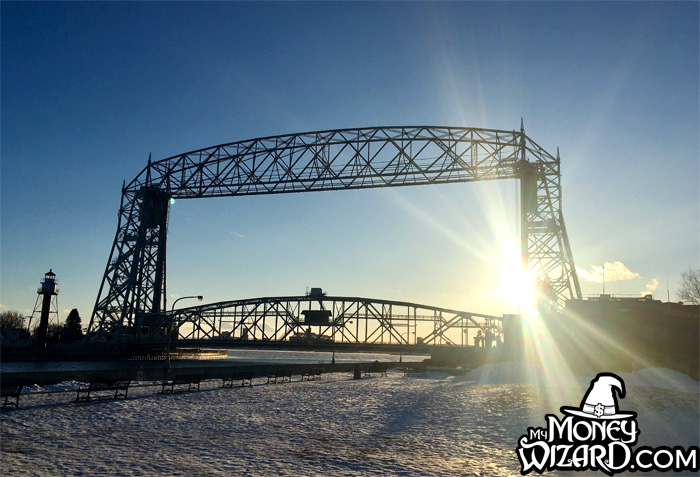 Hey Money Wizards, welcome to another Net Worth Update. Every month, I share my progress towards a $1 million portfolio and an early retirement by age 37.

This update comes a few days late, but boy, is it gonna be worth the wait.

No, really… that was actually a question. So, let me know in the comments.

February came and went like it’s the shortest month of the year or something.

The month started with a quick weekend up to Duluth, Minnesota, which is just over two hours from Minneapolis. You may recognize the name from all those ridiculous Trading Company commercials on TV, but the place is also one of the largest port cities in the United States.

It sounds crazy, but somehow, those MASSIVE shipping barges make their way all the way from the Atlantic ocean, navigate inland through a 2,300 mile maze of great lakes waterways, and then harbor into Duluth, the southernmost point of Lake Superior.

From here, the shipments have a perfect centrally located spot to east, west, or even south down the Mississippi. In other words, the next time that $14.99 Made in China doggie-seat cover shows up at your doorstep without a hitch, give a friendly hat tip to the port-city of Duluth.

And like any good port city, Duluth has a ton of bars. And since Lady Money Wizard and I bought one of Minnesota’s bar coupon books earlier this year, we had to make our way north to claim our free beers.

Because hey, nothing makes more financial sense than planning a huge three day road trip to claim a couple of $6 beers. Wait, surely I didn’t just fall victim to compound spending, did I?

Oh well, the trip was a blast.

In other February news, The Money Pup and I hit up one of Minnesota’s other 10,000 lakes that happen to be frozen right now.

He was fascinated by a train, and I immediately whipped out my phone to capture the moment. The Money Pup on top of a frozen lake, with a giant steam engine rolling into view, perfectly framed on all sides by beautiful rolling hills.

Instead, what I got was this:

To end the month, I closed the book on my winter’s ski season. Me and three of my best friends hopped on a plane and headed to Denver, where we ski-bummed Winter Park for three days. You’ll see the impact on my spending in a little bit, but despite the stereotype, ski trips can be shockingly affordable when 4 grown men are willing to share two queen beds.

Luckily, my Winter Park picture turned out much better: 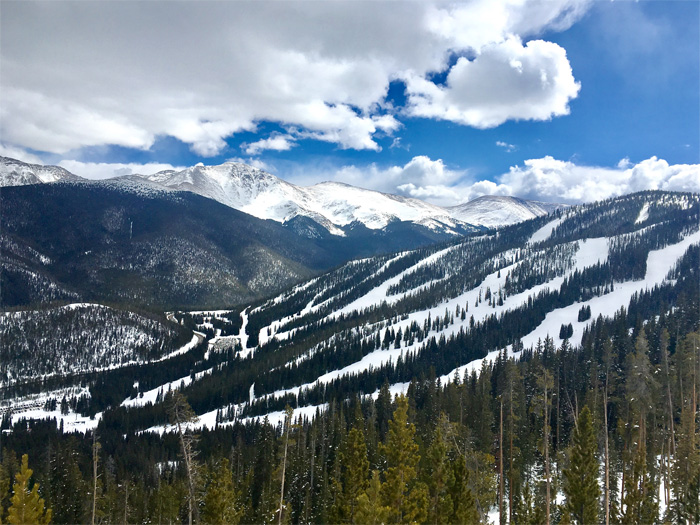 And the detailed update:

Anyone who followed the markets last month might be really confused how February ended so well for me, when the markets we’re in the dumps all last month.

Well, I’ve got a neat little trick that helped my portfolio grow during one of the most brutal stock market months of the past few years…

…I waited to tally up the totals until March 10th.

It wasn’t exactly intentional, but it was pretty poor timing on my part.

Had I actually been typing this update at the end of the month, we’d have recorded one of our only drops in the history of this site. Then, I could have gone on and on about what a nice reminder this is that nothing is guaranteed in investing, and that we can never expect the stock market’s non-stop rally over the past decade to go on forever.

But instead, I spent the last days of February sliding down mountains in Colorado, and when I came back, my desk was met with an equally large mountain of work to catch up on. As I caught myself up, so did the stock market, and in week or so between the end of February and the writing of this update, the S&P 500 had almost fully recovered.

Nonetheless, the MASSIVE dip you see in the middle of the chart should serve as that nice reminder. And since we can’t go back in time to February 28th, this sort of month-and-a-half net worth update is what we’re stuck with.

Cash went down, but only because the odd month-and-a-half format of this update is rearing its ugly head. Because of the extended window here, I paid two months worth of credit card statements in these 40-ish days plus rent, and I haven’t gotten the latest paycheck to ease the damage. If we were to look at just February’s spending, my cash flow was thankfully in the green.

Up for “the month” but only because of how late I am with this update. Things would have looked much more red as-of February 28th.

No contributions this month, so my breakdown remains roughly:

That’s $1,000 of investment gains after my $2,000 of paycheck contributions and employer matches. Again though, this would have been a much more bloody story if I actually compiled this update at the end of the month.

Nothing too crazy to report here, just a little bit of market movement after zero dollars of contributions this month.

I’m still debating on what sort of composition I’d like for my 2018 Roth contributions. Currently, all $22,000 is investing in Vanguard’s REIT index fund. As I get closer and closer to a potential rental property, I may adjust my contributions to have less real estate exposure.

No, I didn’t score free housing.

Instead, I paid my half of the mortgage during the first few days of March, which means the rent is “payable” and instead it’s been paid.

With the all the moving parts including multiple billing cycles, fronting money for ski trips, and who knows what else, I’m not even going to try to figure out this mess. Instead, onto the spending report…

Unlike the rest of this update, this report is accurate in just including February. Most of it is self explanatory, but I’ll add a few notes.

This 110 year old house’s heating is proving to be less efficient than I thought.

Lots of driving this month, including the roadtrip to Duluth.

My old ski gloves smelled like death. Then, an unexpected encounter with a bump on the mountain broke my old ski poles. Neither pieces of equipment impact the amount of fun I have with the sport, so I replaced them both with the cheapest options possible.

I blew out the crotch on my favorite pair of jeans, and I eventually replaced them after watching the sales for a little while.

We stocked up on some bamboo flooring (scored less than $1 a square foot!) in preparation for the looming kitchen remodel.

The ‘ole Mazda 3 rolled over 10,000 miles last month, so I paid for servicing in addition to the usual ~$80 insurance bill.

Includes $230 for tax preparation from an Enrolled Agent.

“But you’re a money blogger! Shouldn’t you be filing your own taxes??”

Nope. I’m not one of those ultra cheap bloggers that thinks every service paid for is a frugal black eye. I gave up on filing my own taxes a few years ago, when I paid $80 to Turbo Tax to avoid $150 to my CPA. Sure, I saved $70. But it also took me 3 hours, and worse, I completely missed the saver’s credit, which would have saved me $400+ in taxes that year. Lesson learned.

By the way, if you’re not already tracking your own spending, I can say from experience it’s probably the easiest way to take control of your money. I highly recommend Personal Capital, which will track everything for you automatically. For FREE.

Readers, how was your February + 10 days of March?