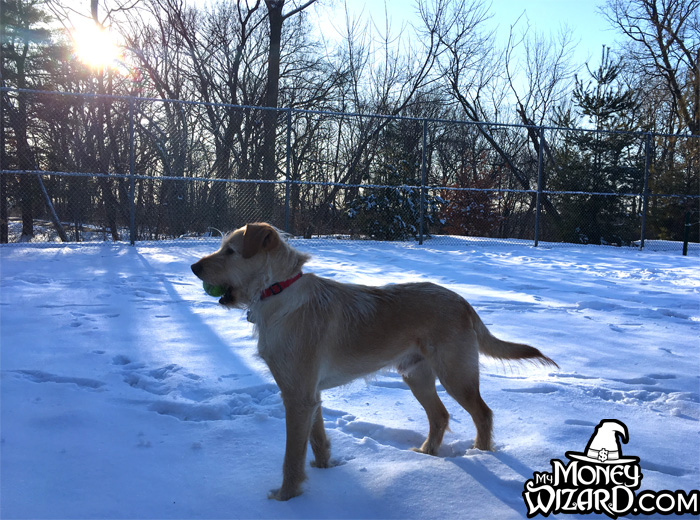 Well Money Wizards, another month is on the books, so now’s the time for that regularly monthly update.

On time this month!

If you’re new here, every month I share my progress towards a nearly $1 million portfolio and an early retirement by age 37. Money tends to be a pretty taboo subject IRL, but I hope that sharing all my details here will help you in your own situation.

Unlike last month, my March didn’t feature any weekend getaways to the Great Lakes or ski trips to the Rockies. Which is probably a good thing, especially after all the wallet damage I inflicted upon myself to start the year.

Instead, I headed into March with a frugal challenge!

Nothing too official (because what’s the fun in that?) but a frugal challenge nonetheless.

At the beginning of the month, Lady Money Wizard and I made a little pact. We’d do our best to eat out waaay less often, or at least dig into the overflowing coupon drawer whenever we did. Instead of defaulting to the expensive date night options, we’d google for free things to do instead. And any big purchases would have to wait until the next month, just to double check that the impulse wasn’t dead by then.

We jokingly started referring to it all as “No Spend March.”

The name was a bit of a lie, since you’ll soon see we did actually spend money during the month, but our exaggeration was effective enough anyhow.

Oh wait, I do have a dollar!

In fact, I have way more than a dollar, because every one of those conversations saved me $5-30 each!

We didn’t go full miser, but we did re-arrange our options to the cheaper choices.

Date nights turned into finally using those ancient Groupons we’d been holding onto forever, instead of just going wherever we craved most. Entertainment featured more trips to the gym or hiking local parks with The Money Pup, which I’m sure he appreciated. We spent more time cooking healthy meals at home, and instead of relying on fancy restaurants to fulfill those random guilty cravings, we gave ourselves permission to whip up cheat meals in the comfort of our kitchen.

Hey, I’ll pit my homemade gumbo, or even the trashy but oh-so-comforting Annie’s Mac and Cheese, against the trendiest restaurant meal any day!

To our surprise, the month didn’t feel like a sacrifice at all! Instead, it felt like a fun little diversion from a rut of thoughtless spending we’d fallen into.

Sure, we weren’t perfect. You’ll see further down there’s still room for a whole lot of improvement.

But that’s okay. We saved a lot of money compared to the past few months, and we had a blast doing it.

The whole little experiment was so successful, I’m already planning my quips about No Spend April.

Because of the frugal efforts and a lack of travel, I don’t have the usual fancy pictures to share with you. BUT, I do have this picture of The Money Pup and The Cash Cat acting out Michelangelo’s Creation of Adam: 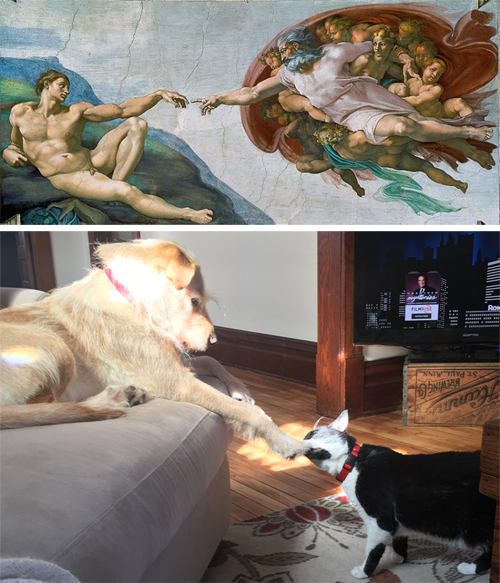 And the detailed update:

What do I think about all this?

I’m not sure the technical term, but “big-freakin-deal” about sums up my feelings.

Hey, just through my 401(k) contributions, I’m consistently buying more than $18,000 of stocks during the year. Plus employer matching. If those buys happen to occur at a price a little bit lower than an all-time high, that’s a-okay with me.

Since I was so late with last month’s update, I haven’t had to pay a credit card bill since our February update. In other words, pure profit for the cash account, although I’ve schedule a round of credit card payments for tomorrow.

A crappy month for the market, compounded by writing last month’s late update during the market’s early March peak. Since then, the market’s tumbled mostly on:

In other words, a whole lot of speculation and not a lot of substance. Like I said, I’m not concerned. After all, I’m investing for the next 7 decades, not the next 7 months.

Despite $2,000 of auto-contributions from my paychecks, the 401(k) still tumbled with the rest of the market.

Hey, the rest of the stock market crashed, and my real estate REIT stayed stable. That’s diversification in action, folks!

FINALLY, some relief from the bitter cold, and my heating bill dropped by a couple hundred bucks. (Split with Lady Money Wizard)

Nice to see a credit card bill below 2 grand again. As usual, this is inflated by some reimbursable work expenses, so let’s look at the detailed spending report:

What?? That sure seems like a lot of money for “No Spend March.”

Like I said… a good start, but lots of potential improvement. Here were the main expenses:

Winter’s last hurrah on my monthly utility bills. That said, I should adjust my budget, because $800 per month seems to be pretty standard these days.

Lady Money Wizard and I split housing costs, which total $1,100 per month in mortgage payments, insurance, property taxes, internet, and a home warranty plan for our little 3 bed/2 bath in the Twin Cities. We also contribute $300 per month to a “maintenance fund” which we keep in case the roof caves in. We share utilities, which seem to range from anywhere from $100 to $350 depending on how hard the heater is working.

The good news? I only ate out five times in all of March, which is a new record for this website.

The bad news? Despite my best grouponing efforts, two of those trips were $40 tabs.

What can I say? I’m a millennial. I can’t quit my brewery habit cold turkey.

Had to pay the quarterly trash bill. Come to think of it, I should probably include that in the monthly “rent” payments. On the other hand, meh.

Almost entirely from my share of a $300 annual vet visit. Dogs are expensive, mmm’kay.

And that’s a wrap on “No Spend March.”

If you’re looking for an easy way to track your spending (or hopefully, lack thereof!) I still recommend Personal Capital. It will track everything for you automatically. For free!

Readers, how was your March?