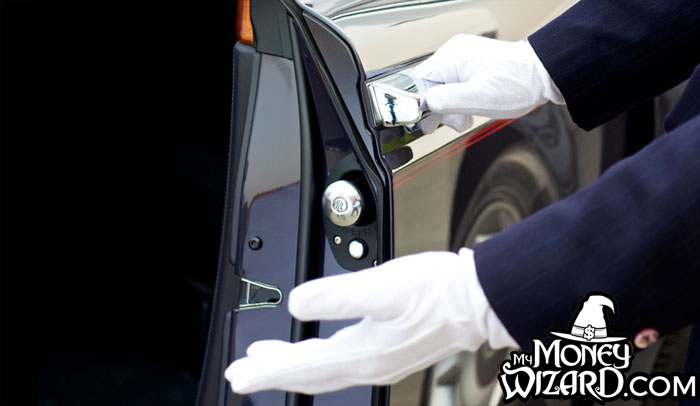 When I was young, my elementary school had one of those Scholastic Book Fairs.

You know the type, the ones where you got an old catalogue printed on paper so thin it would make a newspaper wince. Inside, the company sold all sorts of books, gifts, and posters spearheading straight into the hearts of third graders everywhere.

From one of those catalogues, I bought a poster of a red sports car. A Ferrari Testarosa:

I hung it on my wall, and every night before bed I’d dream about growing up to be able to afford something as cool as a Ferrari.

It wasn’t until I was nearly 30 years old that I’d realized I’d been lied to my entire life.

The Myth of Status Goods:

Ask any car enthusiast, and they’ll tell you – a Rolls Royce Phantom is considered one of the finest cars in the world.

The Car and Driver website explains it clearly: “The Phantom is not only the ultimate status symbol, it’s the Holy Grail of handcrafted luxury automobiles.”

And they mean that handcrafted designation literally. The car is so hand-made, there’s literally a guy who’s entire career involves grabbing a fine-toothed paintbrush and painting ruler-straight stripes down the car’s side, by hand:

The price for all that handmade creation? An MSRP which starts at $425,000.

Can we stop for a minute?

We live in a world where not only do rulers exist, but where machines can single handedly land airplanes and AI can create their own languages. Those same machines definitely mastered straight lines decades ago, and their efficiency could surely drive the half-a-million dollar sticker price of a Rolls Royce back down to earth.

But of course, Rolls Royce, and its Ultra High Net Worth clientele, don’t want this. Which exposes the farce of status symbols for what they really are:

There was a time in history when status symbols were a race to perfection.

But slowly, over time, things became too good. When machines began perfecting straights lines better than humans ever could (and bringing the cost of those straight lines down to a price the masses could afford) the rich could no longer stand out with perfection.

Instead, they needed the lack of it.

So, the only way to drive up the price of status symbols was to flip the table in the other direction. Things started heading down a regressive, weirder path.

James May, one of the most famous car-reviewers is the word, lives by an often quoted motto in the world of automobiles:

It’s an attitude that’s left him, a guy who’s driven almost every car on the planet, citing a Fiat Panda as more enjoyable than the previously mentioned $500K Rolls Royce Phantom.

The Stig, James May’s mysterious co-host, likewise said that you couldn’t “just drive” the world’s fastest car, the Bugatti Veyron. Nor could you just floor it.

Instead, you had to look a football field in front of you at all times. You had to strategize in advance, and give serious thought to how hard you planned on pressing the pedal.

In other words, the Bugatti reached circus-like levels of performance so impractical, it was dangerous.

As middle-class people, we do not appreciate this. Even to this day, I find myself lusting over expensive cars.

But by any objective measure, even the Mazda 3 I bought for $13,000 is a “better” car for the average road.

And the Mazda has one last, albeit minor advantage over the Bugatti.

Do you really want something? Or do you just want what you don’t have?

Look, I’m not saying that that I’d pass on a Ferrari or Bugatti if you handed me the keys tomorrow. I have no doubt that one of these insanely expensive super cars would be tons of fun to drive. At least temporarily.

But there’s an important distinction for anyone wondering whether this whole saving money thing is really worth it. These status symbols are fun, first and foremost, because they’re different.

Not necessarily because they’re better.

A Rolex watch keeps time worse than your iPhone. They require frequent maintenance, and by nature of their design, become “fast” or “slow” after a while. But everybody owns an iPhone, so suddenly, the worse option becomes the more expensive option.

I suspect this is why people like Dan Bilzerian or Felix Dennis say that being rich is overrated. Because they essentially dedicated their lives to purchasing a novelty. And then, that novelty wore off.

I imagine it’s like getting let in on a secret you’ve been dying to know for ages, only to realize it wasn’t nearly as interesting as your mind had hyped it up. Or unlocking a new level in the video game, only to realize the levels you already had were better all along.

There is one place where the quality and value of goods hasn’t yet been destroyed by the arms race of exclusivity.

It’s called the mainstream. And it’s everywhere around us.

And even better? As long as you stay within the lanes of sensibility, these things actually benefit from their lack of exclusivity.

This should be the goal of your money. Aspire for happiness. Not novelty.

If you do that, your dollars will go farther. You can then use those excess dollars not to impress others for the sake of being different, but to work towards your own internal goals.

Before you know it, your savings will allow you to purchase a status symbol unlike any other – your financial freedom.